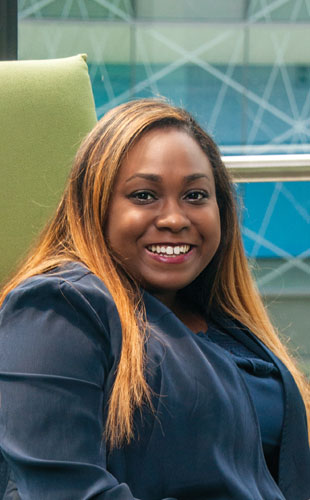 KEVIN CLARK, NGA OFFICE OF CORPORATE COMMUNICATIONSBrooklyn, New York, native Joeanna Arthur grew up thinking she would be a lawyer. A high school advanced-placement psychology class changed her course—the first of many reorientations that would eventually lead her to the National Geospatial-Intelligence Agency (NGA) in Springfield, Virginia.

Arthur had planned to go into clinical practice, but a neuropsychology course during her undergraduate years at Adelphi University on Long Island altered her goals again: she would be a neuroscientist.

As a PhD candidate at George Washington University in Washington, DC, Arthur studied how people use cognitive functions to orient themselves. “I tested healthy college undergrads, spinning them around and blindfolding them,” she recalls. “I felt like Dr. Evil.”

She showed that allowing people to look at their surroundings before being blindfolded and rotated while seated in a chair helped them to answer more consistently when asked to identify how...

“Your memory of the environment before you get the turn is actually playing a very strong role,” says her graduate advisor John Philbeck, who is now at the University of Wollongong in Australia.

Arthur explained that being oriented prior to being spun might make people feel more certain about their positions during the spinning process, although they still make systematic errors in determining which direction they are facing.

However, this effect only persisted when the subjects were asked to indicate a target using a pointer fixed a short distance from their bodies, and not when they were allowed to indicate the location of the target relative to their own bodies.2 This indicates that people are more likely to rely on their spatial memory when they need to judge the relationship between external objects than when judging their own internal motion.

While Arthur debated remaining in academia, she decided she wanted to be “in a more fast-paced environment where you were able to apply your findings to a larger problem.”

Today, Arthur is one of a small group of life scientists working at the NGA, where she is a project scientist for the InnoVision program in the Basic and Applied Research Office. While the agency excels at “mapping out terrain and activities on the Earth” using satellite and other remote-sensing data, it is traditionally less experienced with “mapping underlying psychological processes going on in analysts’ heads,” says Arthur.

Arthur’s first supervisor at NGA, Beth Driver, now retired, recalls that from the get-go Arthur “got some data that rang counter to some self-perception at NGA.” The work brought up questions about the limits of human analytic abilities. Arthur was able to present her findings as well as the larger relevant literature calmly and with confidence, Driver adds.

Arthur has also been helping to adapt 3-D visualization tools and ways to navigate through on-screen images using gestures rather than toolbars to enhance the experience of NGA analysts as they examine geospatial data. She says that analysts’ experiences with looking at satellite data while standing next to a light table changed when, in the 1990s, they switched to analyzing data while sitting down at a computer—and they found themselves getting disoriented while examining images. Arthur hopes that recreating that earlier feeling of being oriented in an image will increase analysis accuracy and speed.

Arthur goes to conferences and to high schools to talk to younger people, particularly those from minority groups, about careers in the sciences and the intelligence community. “I had awesome mentors,” she says.

But Philbeck says that Arthur has also found a unique path. “She creates her own opportunities.” 