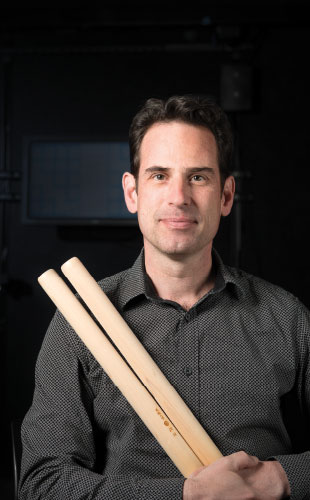 © FRANK ROGOZIENSKIWhen he was a toddler, John Iversen made his first drum set out of pots and pans. But he soon joined his family of percussionists to play real drums and, as a teenager, founded his own rock band. Iversen became curious about the impact of music on humans and animals while studying physics as a Harvard University undergrad.

“You do find many people studying [the] neuroscience of music are musicians, and I’m no different,” he says.

Auditory physiologist Nelson Kiang in the Eaton-Peabody Laboratory at Harvard/MIT helped Iversen chart his career path. In 1992, Iversen started his PhD research in the lab of Harvard auditory researcher Christian Brown. But he interacted a lot with Kiang, who studied how the ear transmits auditory signals to the brain and the neural processing that follows. “Most graduate students in science nowadays do research really organized and thought through...

In 2001, Iversen’s study of music and the brain took off in earnest after his grad school classmate Ani Patel invited Iversen to join him at the Neurosciences Institute in San Diego to do postdoctoral research in a budding program on the subject.

Working together for about 12 years, the collaborators published several noteworthy papers. One was inspired by a YouTube video that featured a sulphur-crested cockatoo named Snowball rhythmically dancing to musical beats.1  Patel and Iversen sent slowed-down and sped-up versions of the song from the clip to Snowball’s owner, who recorded videos of the bird dancing to those versions and returned them to the researchers, who tested whether the bird’s dancing tempo changed.

“John brought a lot of wonderful insight to that project,” recalls Patel, who is now at Tufts University. “This brought a lot of interest in the issue of how other animals experience human music .?.?. and how to understand the evolution of our perception of music,” Patel says.

Iversen, now at the University of California, San Diego, studies the neural mechanisms of rhythm perception—trying to pinpoint which brain circuits enable us to dance and detect rhythm in music and speech. He demonstrated the active role of the brain in shaping how a listener perceives a rhythm, a finding that formed the basis of the action simulation for auditory prediction (ASAP) hypothesis.2,3 According to this hypothesis, listening to rhythms is not solely auditory, but is fundamentally shaped by the brain’s motor regions, which predict incoming beats. This suggests that the complex coordination between auditory and motor planning regions involves a neural circuit that was strengthened as humans evolved vocal learning and musical rhythm perception.

With Ramesh Balasubramaniam, a neuroscientist at the University of California, Merced, Iversen is now investigating the ASAP hypothesis in humans by measuring brain function with electroencephalography and directly testing whether auditory perception is disrupted after temporarily disabling motor regions using transcranial magnetic simulation.

“[Iversen] is one of the most original thinkers in the world of music and auditory neuroscience,” Balasubramaniam says, “and is one of the few people I know that can bridge a wide gap between evolutionary biology, cognitive psychology, and the brain sciences.”