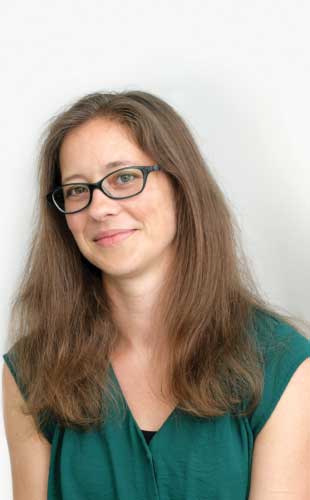 NIH/NIDCD As soon as she started her first real science class in seventh grade, Katie Kindt was hooked on genetics. “There was always something about genetics that made sense to me,” she recalls. “It linked the unknown in the world to something that we could follow.”

Kindt began doing research as an undergraduate at the University of Wisconsin–Eau Claire in the late 1990s, earning her bachelor’s in molecular biology and biochemistry. In graduate school at the University of California, San Diego (UCSD), she discovered a passion for neuroscience during her lab rotations. “I’ve actually never taken a neuroscience class,” Kindt says, but she completed her PhD studying mechanosensation in Caenorhabditis elegans under neuroscientist William Schafer.

In Schafer’s lab, Kindt combined genetics with microscopy to study neuron formation and function, observing neural migration in real time. She discovered that dopamine modulates the response to touch in C. elegans,...

“Now, techniques of using optogenetic indicators are very widespread, throughout not just C. elegans but in all the mammalian systems as well,” says Schafer, who is now at the Medical Research Council Laboratory of Molecular Biology in the U.K. “[Kindt] was one of the early pioneers in showing that this technique was useful as a way to look at neural activity in intact animals.”

Kindt graduated from UCSD in 2006 and moved onto a postdoc at Oregon Health & Science University under sensory biologist Teresa Nicolson. There, she traded C. elegans for zebrafish. “I was interested in trying to take these imaging-based approaches into a vertebrate system,” Kindt says. “I really liked the accessibility of the zebrafish auditory, vestibular, and lateral line systems. It’s a microscopist’s dream.”

During her postdoc, Kindt found that while the lateral line hair cells are only capable of being stimulated in a specific direction in the adult zebrafish, this polarity is reversed during development.3 Some of these results have also been shown in mouse auditory hair cells.

In 2013, Kindt joined the National Institutes of Health’s National Institute on Deafness and Other Communication Disorders (NIDCD) as an investigator. She’s recently started studying the lateral line to examine the coordinated activity of hair cells—which also sense sound in the inner ears of mammals—in vivo. “She’s wonderful—she’s a great colleague,” says Doris Wu, a molecular biologist at NIDCD who was on the search committee that hired Kindt. “She’s very bright and has an interesting niche of expertise and research thinking.”

Kindt began incorporating CRISPR technology into her research when she set up her lab at NIDCD, knocking out whole classes of genes to identify novel proteins required for synapse formation and function in zebrafish. She tries to make her research as translatable as possible, to understand hair cell formation and regenerative processes that may someday help treat noise- and age-related hearing loss. “All hair cells have genes and proteins that are very well conserved,” she explains.

Microscopy remains at the core of Kindt’s research program. “I love all the imaging we’re able to do,” Kindt adds. “Looking at all the activity, all the different cells simultaneously, seeing all these things happen live—it’s really amazing.”