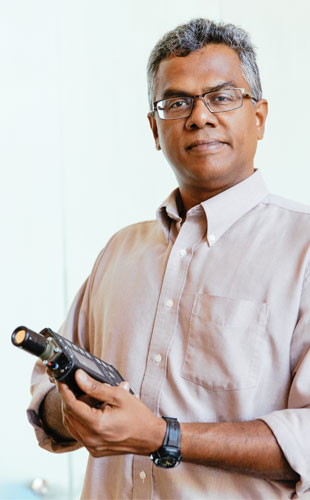 © SCOTT GOLDAs a senior at Anna University in Chennai, India, in the early 1990s, engineering major Khaleel Razak helped design a telephone for the hard of hearing, using the alphanumeric keypad to transmit messages for display. His group tested a prototype at a local school for the hearing-impaired, where Razak witnessed children communicating with people at a distance for the first time. He decided he wanted to go to the U.S. to study bioengineering.

After earning a master’s degree at the University of Wyoming, Razak stayed to join the lab of Zoltan “Nick” Fuzessery, who studies auditory pathways in the pallid bat. The pallid bat is unusual in that it echolocates only to navigate its environment, not to hunt, as most bats do. Instead, the animal simply listens for the rustlings of insects and arachnids on the ground, a behavior known as gleaning. So, as a...

For his PhD dissertation, Razak recorded signals from neurons in the bat brain and found that the animals have distinct neural conduits for these two sensory inputs.1 “From the midbrain to the thalamus to the cortex, there are parallel pathways that process the echoes and prey-generated noise,” Razak says. “Each pathway then becomes almost like its own auditory system.”

Razak then headed off to Georgia State University for a postdoc in Sarah Pallas’s lab, where he studied how the hamster midbrain represents visual stimuli following birth and into adulthood. “It was pretty apparent from the very beginning that he was going to be a star,” Pallas says. “He was really just head and shoulders above any previous postdocs I had had.”

Razak then took what he had learned about brain development back to Fuzessery’s lab for a second postdoc focused on how the pallid bat’s two parallel auditory pathways are selective for environmental noise or echolocation signals2 and how the flying mammal’s auditory cortex represents the location of prey. He found that the difference in the intensity of a noise between the two ears—a well-characterized mechanism for localizing sounds—corresponds to a map of sorts in the auditory cortex.3

In 2007, Razak started his own lab at the University of California, Riverside, where he continues to study the pallid bat. His early graduate students Mike Trujillo and Sarah Rotschafer launched two additional research programs on the mouse auditory system. Trujillo focused on how deterioration of hearing in the ear leads to changes in the brain, and Rotschafer studied why mice with fragile X syndrome, a genetic model of autism, are hypersensitive to sounds. While the two students have since earned their degrees, Razak continues both lines of research in his lab today.

“He was used to black-and-white, yes-or-no type things. He wanted those very clean results, which you don’t get when you’re [studying] the brain,” says Fuzessery of Razak’s early days in his lab. But “he stuck with it. He had more guts, more fortitude, more positive attitude than a lot of people.”