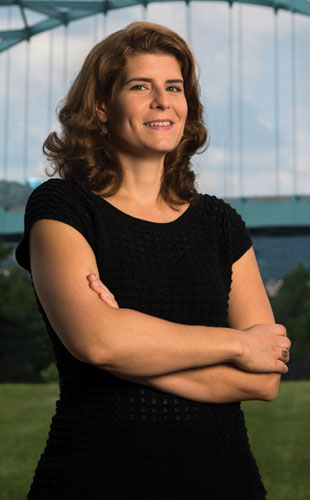 © ROB LARSONIn 2002, Lisa Boyette was a first-year medical student at the University of Virginia (UVA) when her 14-year-old brother, Jon, was taken to the emergency room. She rushed to see him. His skin had yellowed with jaundice as his immune system destroyed his red blood cells, a condition called autoimmune hemolytic anemia. “He was so weak and so young,” Boyette recalls. It was the first time he had been gravely ill, but it wouldn’t be the last.

Meanwhile, Boyette was training for her MD/PhD. She wanted to be a doctor, as well as a scientist who could affect patients’ lives through research. But when she couldn’t find a project she was passionate about at UVA, she opted to finish her PhD research at the National Institutes of Health with bioengineer Rocky Tuan, now at the University of Pittsburgh. In Tuan’s group, Boyette discovered a way...

Boyette supplemented her research with a science policy fellowship investigating new ways of tackling medical problems. In 2009, in collaboration with the Institute of Medicine, she researched case studies on how biomarkers might diagnose chronic disease2 and helped craft a framework to revamp the national clinical trials system.3

In 2009, when Jon was 21, he was diagnosed with primary sclerosing cholangitis (PSC), an autoimmune disease of the bile ducts. His earlier bout with anemia had been a prelude to this more serious condition. Without liver transplants, more than half of patients die within a decade. “I thought, ‘Why can’t we fix this?’” Boyette says. Because PSC is so rare, affecting only 1 in 10,000 people worldwide, few researchers or pharmaceutical companies have devoted resources to it.

In 2014, Boyette, her brother, and University of Pittsburgh geneticist Dietrich Stephan formed a nonprofit organization to coordinate research on novel therapies for PSC patients. Stephan says Boyette was “incredibly brave” to abandon the security of an academic track. Boyette named the company “SAVE JON.” With about $750,000 in revenue so far, the company has attained $15 million in research funding.

Boyette now helps coordinate research by other academic scientists to sequence the exomes of 30 patients and identify potential genetic variants that predispose people to PSC. She has teamed with Garry Nolan of Stanford University to characterize the immune systems of the patients and with Eric Schadt of the Icahn School of Medicine at Mount Sinai to decipher patterns in the data using machine-learning algorithms. Boyette aims to have drugs to treat PSC ready for Phase 2 clinical trials in just five years.

“I think this is the new model for how we should approach diseases,” Stephan says. Because its approach could ultimately be used to address any disease, SAVE JON was renamed Curable in July.

Through Curable’s efforts, Boyette hopes to save her brother. But her company doesn’t have to be the one to make the breakthrough, she says. “If somebody else were to wake up tomorrow morning with a cure for PSC, my family would rejoice,” Boyette says. “There are plenty of other problems for us to go sink our teeth into.”