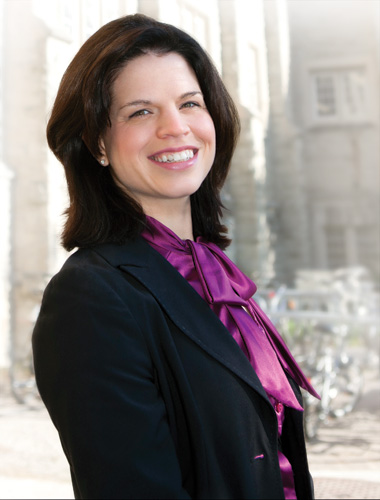 In his office at Queen's University in Kingston, Ontario, biologist Charles Graham keeps a box containing copies of first-author papers and awards granted to students he's mentored. He is particularly proud of the program for the 2009 Canada's Premier Young Researcher ceremony, which he likens to "the Ministry of Health Oscars." Graham's former student Lynne-Marie Postovit won the award for her study of how oxygen levels in a tumor's microenvironment can shape tumor progression.

METHODS: Graham says that he knew within five minutes of meeting Postovit as an undergraduate that he wanted her to join his lab. Though Postovit had never done research before, her ability to "extract joy from experiments" that didn't aways give the desired answer made her a natural, says Graham. Postovit refuses to describe any hiccups in her career as obstacles, focusing only on the opportunities that arose from setbacks.

"I wasn't going to sit around and complain," she recalls. Instead, she took a concept from her first project–that nitric oxide can regulate trophoblast invasion–and applied it to a model of cancer metastasis. Postovit discovered that low oxygen levels promote tumor progression by blocking nitric oxide-dependent inhibition of tumor invasiveness, and that treating cancer cells with nitric oxide mimics could slow tumor growth.1 Together with Graham and their collaborators, Postovit filed a patent to use a nitric oxide mimetic to treat cancer, an approach that has shown promise in early prostate cancer trials.

"Lynne has an amazing capacity to integrate knowledge and apply it in a productive way," says Graham.

RESULTS:As a postdoc in the lab of Mary Hendrix at Northwestern University, Postovit transitioned to studying the connection between the embryonic microenvironment and cancer in zebrafish, a leap that came with its fair share of uncertainty, according to Postovit's husband, Tony Hodges. But as before, Postovit's ability to find opportunities in challenges prevailed. "I need to be solving puzzles," Postovit says. "I don't like having to follow a plan."

Postovit helped identify a new embryonic morphogen, a class of signaling molecules that help direct cellular differentiation early in development. Expression of the newly described molecule, dubbed Nodal, appeared to shut down early in development, but it was later re-expressed in aggressive cancer cells.2 Postovit was then able to develop a three-dimensional model of the human embryonic microenvironment that allowed her to identify Lefty, an inhibitor of Nodal,3 leading to another patent.

DISCUSSION: Graham credits Postovit's success to her "bright brain? and warm personality, as well as to her ability to establish collaborations with investigators in other fields. "Lynne is great at finding people who can help her find answers," Hodges agrees.

In her own lab at the University of Western Ontario, Postovit is combining her findings on the human embryonic microenvironment's relevance to cancer with her earlier work on nitric oxide, showing that Nodal is induced by low oxygen levels.