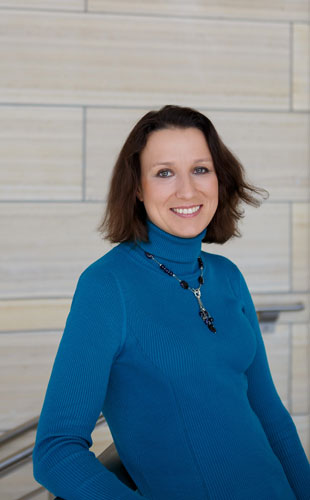 © JEN MADIGANIn her second undergraduate year at Leningrad Polytechnic Institute in Russia, which became St. Petersburg State Polytechnic University during her time there, Maria Spies had a choice to make: focus on her upcoming chemistry and theoretical physics exams or push hard to earn a spot on a nationally competitive synchronized swimming team. “The exams won,” she says.

Her father, an engineer in her native St. Petersburg, inspired Spies’s initial interest in physics and engineering, but she soon shifted her focus from building big machines to trying to understand small ones—specifically, those involved in DNA repair. As part of her bachelor’s and master’s degrees in physics with a biophysics emphasis from St. Petersburg State Polytechnic, Spies worked in the lab of Vladislav Lanzov at the Petersburg Nuclear Physics Institute.

She began her PhD in Russia, but then earned a scholarship to study at Japan’s Osaka University in...

Then Spies headed to the lab of Stephen Kowalczykowski at the University of California, Davis, where she continued investigating DNA repair. “As a postdoc in my lab, she was fearless and smart, and she was always willing to take any approach that would answer the question,” Kowalczykowski wrote in an e-mail to The Scientist. Spies figured out the molecular mechanism used by E. coli RecBCD helicase to repair breaks in double-stranded DNA.2

After a faculty stint at the University of Illinois at Urbana-Champaign, Spies was recruited to the University of Iowa by Charles Brenner, chair of the biochemistry department. “She’s a very creative, high-energy scientist,” Brenner says. He adds that Spies’s expertise in biophysics and single-molecule biochemistry has generated extensive collaborations within and outside of the department.

Biophysicist Richard Fishel of Ohio State University is a longtime collaborator and says that Spies’s physics background is a fundamental part of her science. Her approach to problems is quantitative, “and that’s really where all of medicine and biology is going,” he says. “When these young physicists have gotten involved, things have really changed” for the better.

The combination of Spies’s physics background and her focus on DNA repair led to her group’s development of a method for efficiently separating individual molecules based on their post-translational modifications.3 The technique has applications for myriad scientific questions, but Spies has no plans to leave DNA repair behind. “It’s getting more and more exciting because we know more,” she says. “And we’re starting to realize how much we still don’t know about the complexity of this process.”