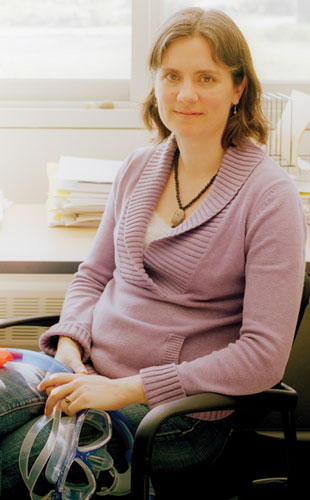 PHOTOGRAPHY BY KAMIL BIALOUSWhen it came time for Mary O’Connor to declare her major at Brown University, aquatic biology simply happened to be at the top of an alphabetic listing. She had enjoyed other subjects, especially neuroscience, but “it became clear that to be a neuroscientist I would have to spend time indoors decapitating rats,” O’Connor says. Instead, she spent the next three summers back in her native Washington State doing research on mud snails.

Upon graduating from Brown in 2000, O’Connor spent a year traveling before doing outreach work on climate change for the Environmental Defense Fund. Finally, O’Connor’s career goals came into focus. “I was motivated by the lack of science about the ecological impacts of climate change,” she says. “Now I had a reason to go . . . to grad school.”

METHODS: In John Bruno’s lab at the University of North Carolina, O’Connor studied...

In another study, O’Connor and her colleagues warmed up an aquarium-bound food web consisting of phytoplankton and zooplankton—plants and herbivores. They found that the herbivores’ energy needs were too great for the plants to keep up, and overall abundance of both went down.2 “The outcome was unexpected,” she says. Previous assumptions had before predicted that a little bit of warming would boost productivity and leave communities intact, “but people generally didn’t consider the herbivore-plant interactions.”

RESULTS: As a postdoc at the National Center for Ecological Analysis and Synthesis in Santa Barbara, O’Connor used her experimental work to develop a new theory, which also predicted that warming would result in no change or even a decrease in plant abundance, because an increase in herbivores relative to plants would reduce total biomass.3

Bruno says O’Connor was an extremely disciplined student, and her success came in part from being an excellent time manager. When she started in his lab, “she told me she wasn’t going to work at night because she was married and going to have a family. You’re a little concerned as an advisor, but I think it’s very inspiring.”

DISCUSSION: In January 2011 O’Connor left California for Canada to start her own lab at the University of British Columbia (UBC) with three goals in mind: to continue to develop a framework for how temperature affects food-web dynamics, to apply models to seagrass communities in Canada, and to mentor young scientists. Sally Otto, the director of the Centre for Biodiversity Research at UBC, said that during O’Connor’s job interview she was impressed with the young researcher’s interest in asking big questions about the impacts of climate change. “That ability to see the bigger picture really made Mary stand out,” Otto says.

As for mentoring, it already seems to be working out. O’Connor’s lab has four graduate students, a postdoc, and a pair of undergrads. She also now has two children—Caroline, 4, and Gillian, 2—and her oldest likes to come to work and help sort samples.