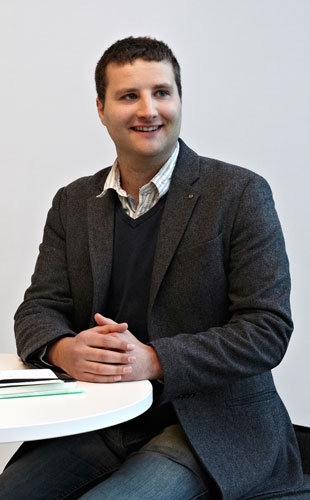 © ELAINE PERKSMatthew Powner studied chemistry at the University of Manchester in large part because he was good at it. “I think it felt like the path of least resistance,” he says. But then he discovered organic chemistry, and its pictorial style of problem solving captured Powner’s imagination.

In organic chemist David Proctor’s lab during his fourth year at Manchester, Powner developed tools for building organic molecules that would react with a compound called samarium iodide to form a specific chemical architecture. He graduated with both his bachelor’s and master’s degrees in the spring of 2005 and, after a summer internship at nearby AstraZeneca, he returned to Manchester to earn his PhD under chemist John Sutherland. While Sutherland hadn’t been at the top of Powner’s list of possible Manchester advisors, it didn’t take long for the renowned origins-of-life researcher to reel Powner in. “I’d always thought of organic...

In Sutherland’s lab, Powner began deriving tetrose nucleotide precursors, whose sugar elements contain only four carbons, under simulated prebiotic conditions. But as soon as he started having some success, he and Sutherland decided to shift their focus to the pentoses, the sugar components of RNA and DNA. Soon, Powner generated precursor molecules of the RNA pyrimidines, cytidine (C) and uridine (U), and just a few years after that, he and Sutherland figured out a way to make the complete nucleotides.1 In both cases, the researchers avoided the use of free ribose, the sugar of modern nucleotides that is unstable under prebiotic conditions, a property that had challenged results from previous synthesis experiments. (See “RNA World 2.0,” here.)

“In the origins-of-life field, that’s one of the biggest things to happen in a long time,” says biochemist Jack Szostak of Harvard Medical School and Massachusetts General Hospital. So when Powner approached Szostak in 2009 about the possibility of doing a postdoc in his lab, “he was already a star,” Szostak says.

In Szostak’s lab, Powner demonstrated the prebiotic synthesis of precursors of two other nucleotides, the purines adenosine (A) and guanosine (G), and studied the ways in which the nucleotides link to form RNA polymers. One challenge that researchers face in RNA polymerization is that the nucleotides’ phosphate groups would not always link the 5’ carbon molecule of one base with the 3’ carbon of its neighbor to create the bond seen in the contemporary, biologically active polymer. Sometimes the RNA molecule would form with 2’–5’ linkages. Powner demonstrated a plausible scenario to generate predominantly 3’–5’-linked RNA under prebiotic conditions,2 and also showed that RNA polymers were just as functional when constructed of a mix of 2’–5’ and 3’–5’ links.3

“He’s just an incredibly focused person,” says Szostak. “He’s one of those scientists who can keep multiple projects going at the same time and push them all ahead.”

In his own lab at University College London, Powner continues to pursue diverse research avenues, including the as-yet-unsolved problem of the complete prebiotic synthesis of purines. “There’s always challenges and always hurdles, but I think everyone in the lab is enthusiastic that it’s going to work at some point,” says Adam Coggins, Powner’s first PhD student, who joined the lab in September 2012. That enthusiasm, Coggins adds, stems from Powner’s own attitude: “He’s really into his science, [and] always raring to go to find out new things.”