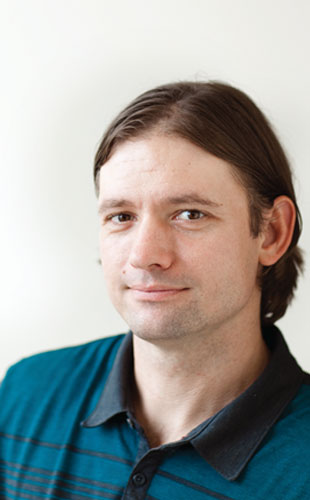 © KATHLEEN DOOHERAs a teenager, Michael Smith was good at math, so he majored in engineering at the University of Memphis. But he wasn’t nearly as keen on making machines as his peers were. “That just didn’t excite me very much,” he recalls. “And the class I enjoyed maybe the most as an undergraduate was just Biology 101.”

At the urging of his thermodynamics professor, he applied for and received a spot in the National Science Foundation’s Research Experiences for Undergraduates (REU) program, and between his junior and senior years joined the lab of University of Memphis biologist Jae-Young Rho to study how cells sense compression. “It was just a summer project for an undergrad, so I admit I accomplished basically nothing, but I did learn a little bit about the concept,” he says.

METHODS: The experience prompted Smith to pursue a graduate degree in biomedical engineering with...

“This was really a transitional paper for me,” Smith says. “It led me to work on mechanobiology.”

RESULTS: Upon completing his PhD in 2004, Smith joined the lab of Viola Vogel, who was in the midst of moving from the University of Washington in Seattle to ETH Zürich in Switzerland. He studied how fibronectin, a key protein in the extracellular matrix that self-assembles into micron-size fibers, could convert a physical force outside the cell into a chemical signal inside cells. Smith devised various techniques to definitively demonstrate that simply tugging on the fibers could cause them to unfold, an action that could translate into a cellular signal.2 (See “The Science of Stretch,” The Scientist, May 2013.)

DISCUSSION: Although his focus is clearly biological, Smith has never lost touch with his engineering roots. As a graduate student in Ley’s lab, he helped build a miniaturized flow chamber to measure shear stress on cells—vastly reducing the volume of fluid needed to simulate flow.3 “Before his technique it was not possible to study mouse leukocytes under flow because these flow chambers were just too bulky and clumsy,” says Ley, now at the La Jolla Institute for Allergy & Immunology.

And in his new lab at Boston University, Smith is printing 3-D hydrogels with patterns of dots or pillars coated in ligands to bind cell surface receptors, allowing him to calculate how much force the cells’ molecular motors generate. “Really no one has done that,” says Boston University colleague and collaborator Joyce Wong, who is using the new technology to understand how smooth muscle cells interact with their environment.

“He is exactly at the interface where he should be,” says Ley. “He uses his engineering to advance cell biology.”