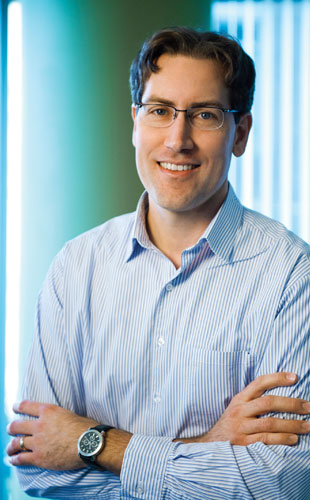 © LIZ LINDER PHOTOGRAPHYNeil Bence loves science so much that after nearly eight years of working toward his PhD, “I had to throw him out of the lab,” says his graduate advisor, Stanford University cell biologist Ron Kopito. Never before, Kopito says, had a graduate student taken such joy in his project that he just kept working, well beyond amassing enough data to finish.

As an undergrad at the University of California, Davis, Bence studied DNA damage repair pathways in plants. “That’s where I cut my teeth in terms of doing bench work and learning the work ethic, the 24–7 mentality of doing research,” he says. Bence thought he would continue working on plant biochemistry as a graduate student, but after a rotation through Kopito’s human cell biology lab in 1996, he changed his mind.

METHODS: At the time, Kopito’s lab was refocusing its efforts from endoplasmic reticulum–associated...

Kopito says that the only way he could convince Bence to wrap up his PhD was to promise him a postdoctoral position in his lab. “It was hard. I didn’t want him to go, either,” Kopito says. Bence stayed less than a year, leaving in 2004 to take up his next challenge—cancer drug discovery—at Millennium Pharmaceuticals in Cambridge, Massachusetts.

The ubiquitin system tied together his work at Millennium and his project at Stanford. Recently, Bence and his colleagues have discovered new inhibitors of the ubiquitin-activating enzyme. The idea is that cancer cells exist in a state of oncogenic stress and are sensitive to inhibitors such as those that disrupt protein homeostasis, Bence explains. “To us, it’s exciting that we’re disrupting something that is a fundamental need of a cancer cell,” he says.

DISCUSSION: Bence says he intends to stick with drug discovery. “The science here is very academic [but] it’s done with a deep sense of purpose.” Chris Claiborne, the vice president for drug discovery at Millennium, says Bence is one of the best team leaders he’s seen. And as much as he’s curious and enthusiastic about his research, Bence has a pragmatic side. “He has not pursued things just purely for academic interest,” Claiborne says. “He wants to know that what he does is going to contribute to delivering new medicine.”