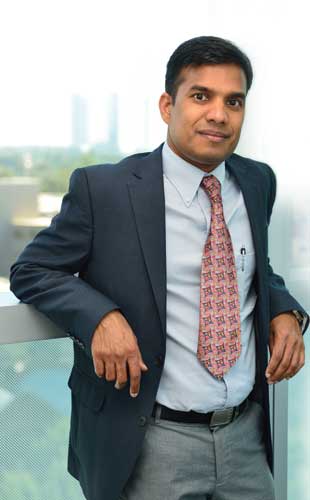 KANG JIN JEONGGrowing up in a small village in India, “I was really passionate to know why things work,” recalls Pradeep Chaluvally-Raghavan. “Very silly and very basic questions” like: Why do plants grow? In college, his questions became more focused. “I wanted to study in a higher-resolution manner why living beings are growing and what kind of mechanism is regulating the growth of the cell,” Chaluvally-Raghavan says. “Then I was really interested to learn more about cancer, because cancer is a kind of unlimited growth.”

After obtaining undergraduate and master’s degrees in biology, he began his PhD work in the lab of Girija Kuttan at the Amala Cancer Research Center of the University of Calicut in India’s Kerala state. There, he began exploring the role of the NF-κB transcription factor and proinflammatory cytokines in the metastasis of melanoma using mouse models, screening for natural compounds that might...

After earning his PhD, Chaluvally-Raghavan dove even deeper into cancer research in the lab of Yosef Yarden at the Weizmann Institute of Science in Israel, where he developed a 3-D cell culture model to study the HER2 oncogene, which is overexpressed in some invasive breast cancers. While normal mammary epithelial cells would form mammary duct–like structures in vitro, the overexpression of HER2 led to formation of solid spheroids. Stimulating those HER2-overexpressing cells with epidermal growth factor (EGF) led to invasive growth. “This was really striking,” Chaluvally-Raghavan says, and the results were consistent with clinical findings that HER2/EGF-activated transcription is associated with poorer prognosis in a subgroup of HER2-positive breast cancer patients.2

In 2010, Chaluvally-Raghavan came to the United States as a postdoc in the lab of Gordon Mills at the University of Texas MD Anderson Cancer Center. “He came very highly recommended [by Yarden],” recalls Mills. “He had [gone] to Israel, had to learn across language barriers, and was creative and driven to succeed.”

Mills had been investigating the components of the 3q26.2 amplicon, a region on human chromosome 3 that is amplified in many ovarian and breast cancers. While most previous research had focused on the genes in the region, Mills’s group noticed that certain microRNAs (miRNAs) were also upregulated.

Chaluvally-Raghavan attacked the project head on, characterizing the oncogenic roles of noncoding elements in the amplicon. So far, he’s identified two key miRNAs, miR569 and miR551b, that are upregulated in a subset of breast and ovarian cancers. MiR569 appears to inhibit the expression of the TP53INP1 tumor suppressor,3 while miR551b activates the transcription of the master regulator gene, STAT3. “Once we have the pathways regulated by the [miRNAs], [maybe] we will find some kind of recipe [that] can inhibit the process of tumor growth and metastasis,” says Chaluvally-Raghavan, who, in collaboration with MD Anderson colleague Anil Sood, is targeting these miRNAs using RNA interference–based therapies. “He’s a hard-working guy,” says Sood. “He’s very thoughtful about what he works on.”