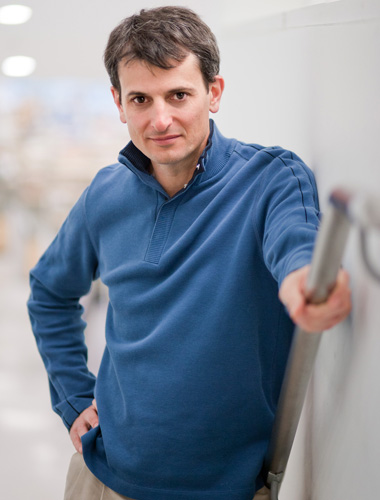 Robert Blelloch started his career as a high school teacher, but quickly identified two problems with that path: it was repetitive, and the curriculum was oversimplified, he says. “I was reading the textbook and knew it was not quite right.”

So he went to grad school, studying organogenesis of C. elegans gonads and earning his MD/PhD from the University of Wisconsin–Madison. Blelloch watched—day and night—as the cells of developing worms migrated through their bodies, observing what went wrong when certain genes were knocked out. He learned, for example, that the distal tip cells of worms carrying gon1, a mutation in a matrix metalloprotease gene, failed to migrate properly in the gonad, resulting in a misshapen organ. His research made the cover of Nature in June 1999.1

METHODS: Blelloch considers his grad school experience the “best years of my life,” he says, but it didn’t...

So Blelloch joined a research-driven pathology program at the hospital, started working nights and weekends in Marc Vidal’s lab at the Dana-Farber Cancer Institute, and in 2002, accepted a postdoc in the lab of Rudolf Jaenisch at the Whitehead Institute for Biomedical Research, where he dove headfirst into the field of stem cell research.

“He’s serious about his work, he’s critical, [but in] a constructive way, and he’s a very easygoing guy,” Jaenisch says. “He was an important intellectual force in the lab.”

RESULTS: In Jaenisch’s lab, Blelloch and his colleagues used somatic cell nuclear transfer (SCNT)—a technique involving the insertion of an adult cell nucleus into an oocyte—to discover that some cancers, such as melanoma,2 are driven by a combination of genetic and epigenetic alterations, while others, like a germ-cell tumor called embryonal carcinoma,3 are essentially determined by genetic mutations. “It will vary tumor-type to tumor-type,” he says.

Blelloch also used SCNT to study cell differentiation and reprogramming, showing that epigenetics—specifically, methylation—seemed to play a key role in determining cell fate, and that by erasing a nucleus’s epigenetic markers, he could help drive reversion to a stem cell-like state.4

DISCUSSION: Blelloch, who last year won the International Society for Stem Cell Research (ISSCR) Outstanding Young Investigator Award for his work, continues his research on cell fate determination in his own lab at the University of California, San Francisco, where he focuses on the role of micro-RNAs. “MicroRNAs seem to be perfectly positioned for this phenomenon of shutting off self-renewal upon differentiation,” he notes. “One miRNA can target hundreds of mRNAs.”

By knocking out a global miRNA-processing gene, then adding back specific miRNAs one by one to monitor what they did, his group has identified whole new families of miRNAs involved in cell-cycle regulation, differentiation, and self-renewal.

“I really like his global approach,” says Marco Conti, director of the Center for Reproductive Sciences at UCSF. He is “casting a much wider net that can allow you to identify complex networks. . . . I think that he will be very successful.”