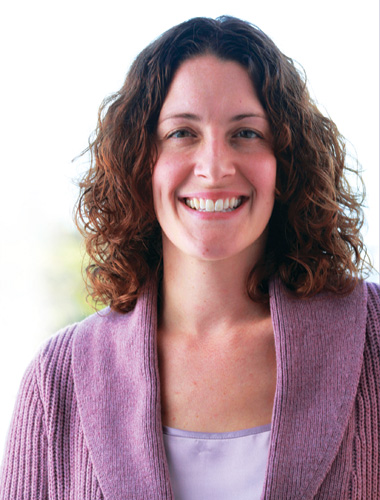 Rommie Amaro inherited a love of math from her math-teacher father. But after a freshman class at the University of Illinois at Urbana-Champaign with chemist Don DeCoste, "I just really fell in love with chemistry," Amaro says. To combine her two passions, Amaro switched in 1996 to chemical engineering, and never looked back.

Her career path was further focused in her junior year, when she joined the lab of computational biophysicist Zaida Luthey-Schulten, who studied the folding of a protein involved in histidine biosynthesis. "I remember just looking forward to Saturdays," Amaro says. "Because on Saturdays I didn't have to worry about homework or anything—I would just go into the lab, and I would do research."

After spending months trying to understand the function and structure of the protein, called imidazole glycerol phosphate synthase (IGP synthase), she decided that the enzyme functioned differently than previously...

METHODS: After a brief post-college stint making Philadelphia Cream Cheese at Kraft Foods in Chicago, Amaro decided there was more to life than "making cheese" and returned to Luthey-Schulten's lab to work on a PhD in 2001. She modeled the energy landscape of IGP synthase to describe how it catalyzed two reactions: first breaking glutamine into glutamate and ammonia, then sequestering the ammonia inside a channel before steering it through to the second active site.1 Amaro predicted which residue would need to be altered to poke a hole in the protein tunnel, allowing the ammonia to escape, thereby preventing the reaction from taking place. Collaborators tested several mutations affecting ammonia transport through the channel and found that one could indeed effectively halt the second reaction, as Amaro had predicted.2

RESULTS: In 2005, Amaro took a postdoc at the University of California, San Diego, with biochemist Andy McCammon, who says she's "living proof that it's still possible to find a creative, brilliant scientist and a delightful, caring person in one and the same individual."

In McCammon's lab, Amaro studied ways to use computational models for drug discovery. One of her main targets was a protein complex that plays a role in African sleeping sickness. In this potentially fatal disease, which is carried by the tsetse fly, parasitic mitochondrial RNA transcripts require extensive editing before arriving at a mature stage that can be used to keep the parasite alive. So the parasite uses a large RNA and enzyme complex called the editosome to copyedit the RNA transcripts. Amaro identified a few drug-like molecules that could inhibit this process.3

DISCUSSION: In her lab at the University of California, Irvine, (she is now back at UCSD), Amaro widened her research to include a range of drug-discovery targets and in 2011 earned a Presidential Early Career Award. She is continuing her work on African sleeping sickness, but is also developing computational models to predict ways to reactivate the apoptosis protein in cancer cells, and modeling the flu virus to develop better antivirals. Amaro says she enjoys working with collaborators. "When we work together with experimentalists is when the projects really just take off."