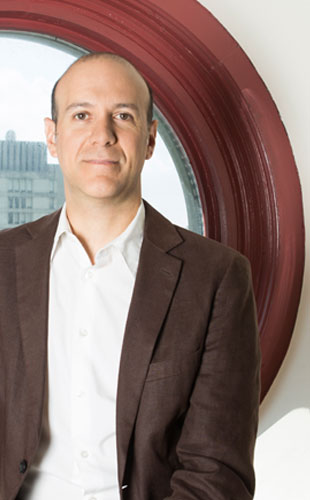 © DUSTIN FENSTERMACHERRuben Gonzalez Jr. worked his way through a chemistry degree at Florida International University (FIU) in Miami, first at a fast-food joint, then at a video store, where he eventually became assistant manager. Somehow, he also found time for science, spending his last three years in Stephen Winkle’s lab researching changes in the shape of DNA when it switches from a normal, right-handed helix to the opposite, left-handed form.

“I got lucky—hit the jackpot—[when] Ruben decided he wanted to work in my lab,” says Winkle, who knew Gonzalez as the student in his biochemistry class acing all of the tests.

Gonzalez had planned on becoming a high school chemistry teacher after college, but Winkle saw a different path for the young scientist and encouraged him to apply to graduate programs. In 1995, the pair were in San Francisco for a meeting of the Biophysical Society when...

In Tinoco’s lab at Berkeley, Gonzalez studied RNA pseudoknots, the simplest known tertiary structure of RNA, consisting of two intertwined hairpin loops. Gonzalez solved the structure of a magnesium ion binding site in a pseudoknot from the mouse mammary tumor virus. He accomplished this by swapping out the magnesium ions, which help stabilize the structure but are not visible using nuclear magnetic resonance (NMR), replacing them with cobalt hexammine ions, which are NMR active.1 “I could actually see where the cobalt hexammine bound to the RNA and detect how it stabilized that particular structure,” says Gonzalez.

“He was not only smart, but he was ambitious and really cared about the science,” Tinoco says of Gonzalez.

Gonzalez went to Stanford University for a postdoc, working under RNA expert Joseph (Jody) Puglisi and physicist Steve Chu to develop single-molecule fluorescence tools that could aid in imaging ribosomes interacting with tRNA during protein translation.2 “[This was] the very first demonstration ever that one could study ribosomes and translation using single-molecule fluorescent approaches,” Gonzalez says.

In 2006, Gonzalez arrived at Columbia University, where he now oversees four postdocs, 11 graduate students, and one undergrad. Much of his group’s current work involves extending discoveries about translation in E. coli to the process in eukaryotes, with an eye toward human health and disease. Gonzalez also continues to innovate on the technological front, most recently by applying single-molecule field-effect transistors (smFET)—carbon nanotubes covalently bonded to the nucleic acids or proteins of interest that can help illuminate molecular structure—to the study of RNA, ribosomes, and translation.3

Gonzalez says he’s excited about how this new tool is going to allow him to dissect the process of translation at an ever-finer scale, in particular at much faster timescales, opening a window on how “ribosomes or other enzymes make decisions about correct or incorrect substrates.”