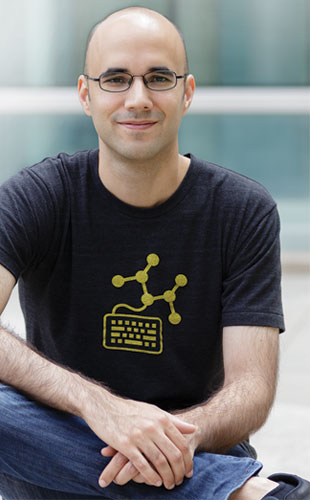 © PAUL SIMCOCKShawn Douglas traces the origins of his current work fashioning nanoscale DNA robots to his boyhood backyard workshop. From age five on, he spent countless hours with his father building model cars, planes, and rockets. “My dad is the most patient and noncritical person I’ve ever met,” Douglas says. “He never grabbed anything and did it for me. Without that I don’t think I would be here.”

Despite the ability he cultivated, Douglas’s desire to study at Yale University surprised his parents, who didn’t think they could afford it until they discovered need-based financial aid. After studying literature at Yale, Douglas eventually opted for computer science, but then realized he didn’t want a tech job. “I don’t like working on things that are going to happen anyway without me,” he says. “I had a gut feeling I could take programming skills into an area that was...

This thinking steered Douglas to a biophysics PhD at Harvard Medical School, working with William Shih and George Church. In mid-2005, shortly after Douglas started working with the synthetic biologists, Shih heard Caltech’s Paul Rothemund talk about creating self-assembling DNA shapes and patterns. “I came back to Boston very excited, and Shawn was the first one with whom I could share the news,” Shih recalls.

At first Douglas tried to enhance and expand software Shih had written to design DNA sequences that would self-assemble. Then he built his own, called caDNAno, from scratch.1 Douglas worked on caDNAno through early 2008, limiting his work in the wet lab and leaving Shih “frustrated with his priorities.” But now Douglas considers creating the program his most important accomplishment, and his former Harvard labmate Hendrik Dietz, now at Technische Universität München in Germany, agrees. “With caDNAno we could really focus on churning out sequences for all kinds of DNA objects,” Dietz says.

Dietz made a breakthrough of his own on DNA self-assembly protocols in late 2007, fuelling a friendly rivalry with Douglas, with each seeking to trump the other’s group meeting presentations. That relationship helped spawn two 2009 papers pushing the field from two-dimensional to three-dimensional assembly2 and enabling twisted and curved structures.3

Working with Church as a postdoc, Douglas used his nascent skills in synthetic biology to develop nanoscale DNA robots. In a 2012 paper, he described DNA boxes loaded with antibody fragments that could be opened with two different molecular keys, such as cell surface antigens.4 “This really inspired people to dream about the therapeutic potential of information-processing nanorobots made out of DNA,” stresses Shih.

Since Douglas became an assistant professor at the University of California, San Francisco, in 2013, his lab has worked towards next-generation DNA nanorobots. “The Science paper from 2012 was a prototype,” he emphasizes. “Something that will be used in patients will probably look very different.” 