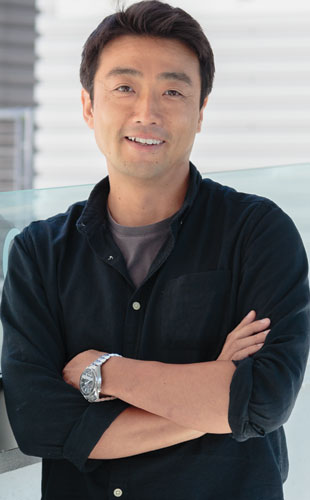 © PAUL SIMCOCKShingo Kajimura is a man who follows his passions, both to new fishing holes and to new scientific questions. Growing up in the Tokyo suburbs, he felt drawn to the natural world from a young age. “I went fishing pretty much every day when I was a kid,” he says.

As an undergraduate at the University of Tokyo, Kajimura paired his interest in nature with biochemistry. “I was really fascinated by this idea that different animals have biochemical mechanisms that allow them to adapt to extreme environments,” he says. After earning his bachelor’s degree, Kajimura received a government fellowship to pursue graduate research in the United States while enrolled at the University of Tokyo, and he packed his bags for Hawaii.

In 2003, Kajimura joined Cunming Duan’s lab at the University of Michigan for his PhD work, studying zebrafish development in low-oxygen environments. But it was when he became a postdoc at Harvard University, mentored by cell biologist Bruce Spiegelman, that Kajimura started exploring human biology.

In Spiegelman’s lab, Kajimura studied brown fat, still compelled by the fundamental questions behind adaptations to extreme conditions—this time, low temperatures. He was part of a team that identified key transcriptional components of brown fat development—the PRDM16 transcriptional complex—and was able to reconstitute the pathway in fibroblasts.1 “Then the question was: We know how to make brown fat, so how can we apply it?” Kajimura says.

He pursued the answer at the University of California, San Francisco (UCSF), where he started his own lab in 2011. Matthias Hebrok, director of the diabetes center at UCSF, recalls making the decision to hire Kajimura. “I met Shingo when he applied for the job in late 2009,” he says. “I talked to Bruce about him afterward, and he couldn’t stop gushing.”

Now, Kajimura’s lab is devoted to brown fat research, and his group is elucidating important properties of the adipose tissue. The team has pinpointed an epigenetic switch, a histone methyltransferase called EHMT1, as the enzymatic modulator of the PRDM16 transcriptional complex.2 EHMT1 directly interacts with the complex as a stabilizer; without it, PRDM16 can’t promote brown fat development. Kajimura’s team has also established the first clonal human brown fat cell lines, leading to the identification of novel molecular markers for brown fat.3

“We used to think that brown fat is an organ that generates heat. But we start to learn that view is too simplistic,” Kajimura says. The presence of brown fat can improve diabetic symptoms, he notes, in a way that can’t be explained simply through heat generation. Kajimura is currently investigating the mechanisms behind this effect. “We think that brown fat talks to other organs, perhaps through cytokines or brown fat–derived hormones.”

Kajimura has never shied away from new avenues for his research. He likens it to his favorite pastime. “You have to find areas that nobody is fishing. If there are too many fishermen, you have no chance,” he says. “There are people who prefer to jump into crowded areas, but I like to find new places. Science and fishing are very similar.”