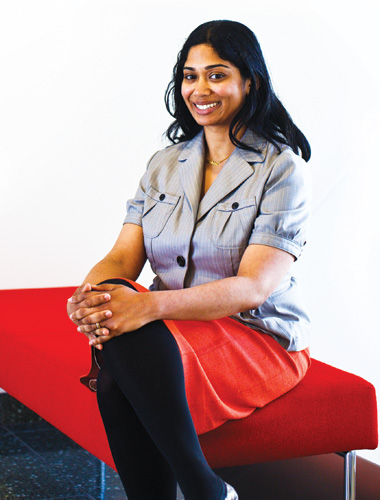 Sohini Ramachandran was 15 years old when she first walked into mathematical geneticist Marcus Feldman’s laboratory at Stanford University. Feldman, had advised Ramachandran’s older sister, Raga, a few years earlier. “I thought Raga was exceptionally smart, but she told me that Sohini was even smarter,” he says. Feldman  ended up offering the younger Ramachandran a research position in his lab for the summer.

So after her junior year of high school, Ramachandran studied genetic variation in Arabidopsis. Based on a mathematical analysis of DNA sequences, she discovered that the plants’ spread around the globe mirrored human movement: Arabidopsis entered the Americas as humans were crossing the Bering land bridge. The research won her fourth place in the 1998 national Westinghouse Science Talent Search (now the Intel Science Talent Search), that year’s youngest winner.

“I was hooked from then on,” says Ramachandran. She went on...

METHODS: Ramachandran’s first graduate project involved the Human Genome Diversity Panel (HGDP), a collection of samples from 1,000 individuals from globally distributed indigenous populations. The HGDP was the brainchild of renowned Stanford geneticist L. Luca Cavalli-Sforza, with whom Ramachandran became close. “It was wonderful to sit and have discussions with him about all the hypotheses he wanted to test in human genetics,” she says. “That really put me on the path of being interested in human data.”

Using the HGDP, Ramachandran demonstrated that genetic diversity within modern human populations decreases systematically with distance from Africa, humanity’s likely birthplace.1 She also contributed to a Science paper that constructed a phylogenetic tree of the HGDP indigenous populations based on genetic relationships.2

RESULTS: Ramachandran was named a junior fellow by the Harvard University Society of Fellows in 2007 and completed a postdoc at Harvard with theoretical geneticist John Wakeley. She combined X-chromosomal data from the HGDP with a population genetics model called coalescent theory, which estimates human migration rates by tracing all the alleles of a gene back to a single ancestral copy. The resulting paper set forth a mathematical framework to describe how X-chromosomal data can be used to infer migration rates and other evolutionary patterns.3

“She has real quantitative, computational, and statistical strengths in the area of human evolution, which is really where a lot of today’s important questions lie,” says David Rand, an evolutionary geneticist and Ramachandran’s mentor at Brown University in Providence, Rhode Island, where she started her own lab in July 2010.

DISCUSSION: Ramachandran is now teasing apart the influence of genetic variation on languages and asking why alleles that predispose ethnic groups to genetic diseases are maintained, with leukemia researchers at St. Jude Children’s Research Hospital in Memphis as collaborators.

“She continues to be extremely good with people as well as with science,” says Feldman. “I predict one day she’ll be president of a university.”