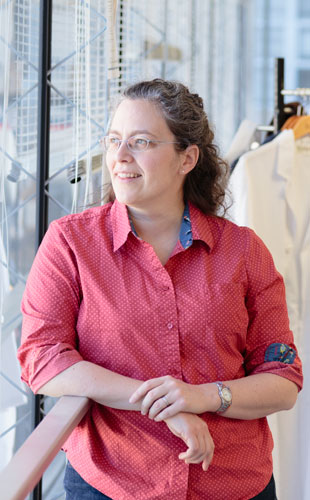 © PAUL SIMCOCKIt wasn’t until the end of her biophysics PhD that Sophie Dumont made up her mind to be a scientist. Until then, the physicist-turned-biologist was still mulling over a few careers—high school teacher and astronaut, to name a couple. But Dumont’s talent for research was evident. “I told her she was crazy not to consider academia,” says Carlos Bustamante, her doctoral advisor at the University of California, Berkeley. Ultimately, Dumont found herself in love with the complexity of cells and “hooked on the problem of cell division,” which her lab now studies at the University of California, San Francisco (UCSF).

Dumont wasn’t introduced to the study of cells until late in her education. As an undergraduate at Princeton University she majored in physics, and she later began a PhD in theoretical physics at the University of Oxford. “After one year I was just too excited about...

“Carlos’s lab was a very welcoming place for a physicist,” Dumont says. There, chemists, physicists, and biologists converged to ask “simple” questions. Among other projects, including one that called upon her physics background to test a statistical mechanics theorem on a biomolecule,1 Dumont designed assays that used optical tweezers to track, at single-molecule resolution, the movement of a viral helicase as it unwinds its RNA substrate.2

As a postdoc, Dumont wanted to scale up from the single molecule to the cell, so she joined the lab of Tim Mitchison at Harvard University to develop assays for probing the mechanics of cell division—in particular, chromosome segregation. “It’s a very mechanical process,” she says. “For somebody with a quantitative background, it’s a very appealing system.”

But first she had to learn the basics. “I knew nothing about how to grow cells, how to look at cells, even the simplest molecular tools,” she recalls. After her labmates ushered her into the world of cell biology, Dumont developed a method to push on spindles during mitosis and watch how they react. She found that the microtubules of the spindle lengthen in a controlled manner in response to applied force, rather than passively flattening out.3 “[The] identification of this mechanical regulation of spindle fiber was a really important contribution to the mitosis field,” Ted Salmon of the University of North Carolina told The Scientist at the time of the discovery in 2009. “I think this is just the start of things.”

Dumont went on to offer early insights into how kinetochores, which connect sister chromatids to spindle fibers, maintain their hold on microtubules that are growing and shrinking. She and her colleagues helped reveal the dance steps during chromosome segregation. For a kinetochore to keep hold of a shrinking microtubule, it connects in two ways: by constantly gripping the microtubule and by adjusting its position to accommodate movement.4

“That paper by no means solves this question” of how the kinetochore holds on to microtubules, she says. “This is a huge question” related to the mechanics of cell division and one that she continues to investigate. UCSF cell biologist Ron Vale says that Dumont, with her hybrid approach of using classical cell biology and physics tools, “represents a new breed of scientist who are trying to understand fundamental principles of how molecules behave and organize in cells.”