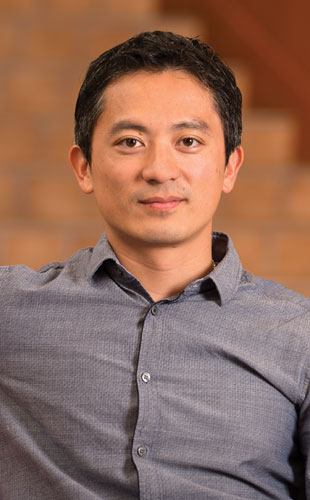 FRANK ROGOZIENSKI/WONDERFUL MACHINEIn his efforts to map the brain’s neural connections, Takaki Komiyama has scrutinized the antennal lobes of fruit flies and injected fluorescently labeled viruses into the tongues of mice. But his first scientific venture involved sitting in a small boat off a tropical island and collecting seawater samples. As a teenager, he served as an unofficial assistant on research expeditions with his father, a chemical engineer who was studying how coral reefs impacted atmospheric carbon dioxide.

“It was a bunch of students and postdocs working as a team,” Komiyama recalls. The experience “definitely made science and research quite approachable—something that I could imagine myself doing.”

Komiyama studied biochemistry as an undergraduate at the University of Tokyo, where he also conducted research with neuroscientist Hitoshi Sakano, contributing to the identification of a novel transmembrane protein in the mouse olfactory neural network.

Enticed by the question of how...

“He was the first author of a Cell paper before he even did his qualification exam,” says Luo. “That was his appetizer.” Komiyama went on to demonstrate that gradients in the expression of a transmembrane semaphorin protein control both axon and dendrite targeting of olfactory projection neurons.2

While at Stanford, Komiyama took more than one cross-country trip to Virginia to visit Karel Svoboda in his lab on the Janelia Farm Research Campus of the Howard Hughes Medical Institute. “Takaki is one of these people who really thinks long ahead,” says Svoboda. “That really manifested itself in how he looked for postdocs.”

As a postdoc in Svoboda’s lab, Komiyama turned his attention to how neural circuits are shaped by learning in behaving mice. Following dynamic neural changes in live animals required delicate surgery to create a window in the skull to enable fluorescent imaging of individual neurons in the motor cortex. Then, with their heads immobilized, the mice learned to perform a “lick/no-lick task.” This technique revealed the strengthening of connections between sensory and motor neurons over the course of learning.3

“The risky part was to have the chutzpah to say that we would develop behaviors for mice that allow us to probe these kinds of fundamental processes of decision making—of how animals turn sensation into perception,” says Svoboda.

Since joining the faculty at the University of California, San Diego, in 2010, Komiyama has applied this method to further investigate the neuroscience of motor learning. In work published in Nature earlier this year, his graduate student Andrew Peters demonstrated remarkable plasticity in the activity patterns of excitatory motor neurons in mice learning a lever-press task.4

Although Komiyama began his career by examining how neural circuits first arise, he’s now driven to explore the versatility of the fully formed brain. “The brain is always changing,” he says, “and it is preparing itself to learn useful things at every moment.”

Correction (November 4): The original version of this article listed Komiyama's primary affiliation as the Department of Neurosciences. In fact that is his secondary affiliation, the Neurobiology Section being his primary. The Scientist regrets the error.