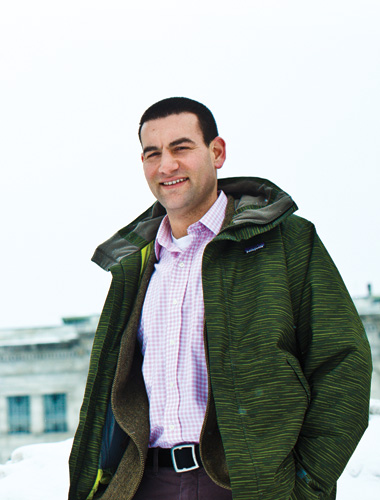 From as early as he can remember, Ted Cohen wanted to address tangible problems. Armed with a medical degree from Duke and an MPH from the University of North Carolina, he headed north to pursue a doctorate in public health. His Harvard School of Public Health mentor, Megan Murray, introduced him to the study of tuberculosis (TB), a devastating disease that has challenged research and eradication efforts for more than a century.

According to the World Health Organization (WHO), 1.8 million people died of TB in 2008—nearly 5,000 people per day. And antibiotic-resistant strains of the TB bacterium, which cost as much as 200 times more to treat, appear to be on the rise, especially in the developing world. Cohen focuses on strategies to banish these intractable cases of TB, and his research takes him around the world.

In order to learn how M. tuberculosis escapes TB control efforts, Cohen turns to math. “Even though I started out in clinical medicine and research, when it came to drug-resistant TB, modeling turned out to be the only game in town,” Cohen says. “Modeling allows us to formalize our thinking and to understand what the major questions are.” In 2004 he and Murray modeled the spread of TB and found that the fittest drug-resistant strains can outcompete drug-sensitive strains if patients aren’t diagnosed and treated for drug resistance in a timely manner.2

RESULTS: Cohen applies his models to TB vaccine development as well. Because the “Beijing” strain of M. tuberculosis appeared to elicit a lesser immune response in animal models than other strains, he predicted that a generalized TB vaccine might be less immunostimulating against it and therefore less effective. Indeed, studies suggest the currently used TB vaccine—the Bacille Calmette-Guérin or BCG vaccine—doesn’t provide as much protection against the Beijing strain as do other varieties.

Cohen modeled how a vaccine that isn’t equally effective against all strains might affect the composition of strains within a population. He found that it could result in a relative increase of the strain that the vaccine is less effective against.3 If that strain was associated with drug resistance—as the Beijing strain is—mass vaccination could be counterproductive. “So far the vaccines used are only challenged with laboratory-type TB strains,” Cohen says. “The modeling work we’ve done says we should test vaccines against clinical strains.”

Even as TB continues to ravage the developing world, some critics consider modeling frivolous or misguided. But Cohen says it can help save lives in the long run. “For me, the point has always been to make a difference, to generate actionable insight, and to change what’s happening by better understanding systems.”