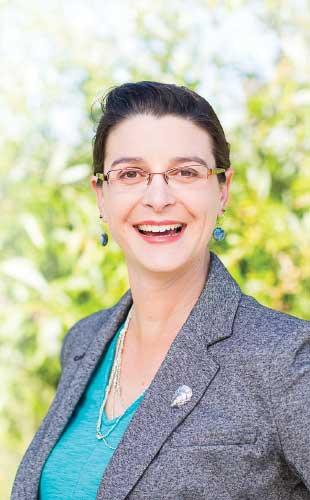 © NAT AND CODY GANTZGrowing up on the Pacific coast, Tessa Hill developed a fascination with the sea and its wildlife. In the late ’90s, eager to see another part of the country—and another ocean—she moved to Eckerd College in Saint Petersburg, Florida, to study marine science. There, she became interested in the relationship between oceans and environmental change. “I wanted to learn more about the Earth’s climate system,” she says. “How it operated in the past, and how we might be modifying that system today.”

In 1999, Hill moved back west for a PhD at the University of California, Santa Barbara, where she worked with paleoceanographer James Kennett to document the contribution of ocean sources of methane to climate change throughout Earth’s history. “She’s very capable of choosing questions of major significance,” Kennett says of Hill, adding that on the methane project, “she just jumped right in.”...

Graduating in 2004, she moved to the University of California, Davis, to investigate more-current climate trends. “I was interested in asking questions about modern impacts on the ocean,” she says. “I think it’s hard to be a climate scientist studying Earth’s natural climate system and not start to wonder how we are impacting things.”

As a postdoc in the lab of biogeochemist Howie Spero, Hill measured shorter-term changes in oceanic environments via deep-sea corals, which show tree ring–like annual growth patterns. “Her research program was extremely successful,” Spero says, noting that it wasn’t long before UC Davis offered her a faculty position. Since then, he adds, “she’s really been the glue, so to speak, that’s held a lot of the research together at the frontier between earth science and biology.”

That research has been carried out on UC Davis’s campus and 100 miles west at the university’s Bodega Marine Laboratory, where Hill’s group reconstructs paleoclimates and assesses the effect of current and expected geochemical changes in the ocean on ecologically and commercially important members of marine communities.

In 2011, for example, her group showed that mussels grown in the lab in seawater containing CO2 levels predicted for 2100 made thinner, more fragile shells.2 And earlier this year, she and her colleagues found that when algae and seagrasses living in tidal pools switch off oxygen-producing photosynthesis for the night, the pools become corrosive to shell-growing animals, indicating that coastal creatures could become early victims of ocean acidification.3 Importantly, Hill says, “we’re starting to connect the dots between what we see in the lab and what we see in the real world.”

Beyond her academic research, Hill has also been recognized for her outreach work—she was named a public engagement fellow by the Leshner Leadership Institute at the American Association for the Advancement of Science in December—and collaborates not only with other scientists but with policy makers and aquaculture industrialists. In May, she visited the White House to receive a Presidential Early Career Award for Scientists and Engineers (PECASE) in recognition of innovative research and commitment to community service.

“I don’t really want to be in the business of documenting decline,” Hill explains. “Rather, I would like to do good science that can be used by people to make better decisions.”