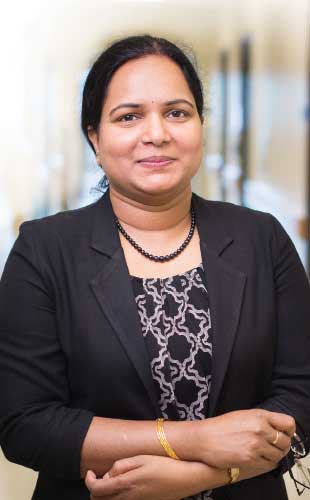 © PETER BARTA/ST. JUDE CHILDREN'S RESEARCH HOSPITALThirumala-Devi Kanneganti became fascinated by disease when she was a high school student in India. “I always used to think, ‘Why do some people get diseases?’” she says. “In tropical countries, we are exposed to all of these bacterial and viral infections. Seeing these infectious diseases spreading, it was always: ‘Why some, and why not all?’”

As an undergraduate at Kakatiya University in Warangal, Kanneganti triple-majored in zoology, botany, and chemistry, seeking answers. She went on to earn her master’s and PhD in microbiology and immunology from Osmania University in Hyderabad, but the pace of research in India frustrated her. “I used to wait for antibodies for two months,” she remembers. “I couldn’t stand that.”

Kanneganti seized the opportunity for a postdoc position in fungal genetics at the University of Wisconsin–Madison in 2001, and brought her husband and daughter to the United...

In 2007, after she’d completed two more postdocs, a listing in Science for a position at St. Jude Children’s Research Hospital in Memphis, Tennessee, caught her attention. When she saw Nobel Laureate Peter Doherty’s name in the hospital’s department of immunology, Kanneganti says, she had to check it out. After she interviewed, Doherty gave her a copy of his book The Beginner’s Guide to Winning the Nobel Prize. “He signed it, saying ‘You have to come to Memphis,’” she recalls.

“What impressed me so much was her real desire to get down and do the work,” says Doherty. “I thought she was something special.”

Within a month, St. Jude hired Kanneganti as a researcher, and she zeroed in on genetic mutations in the murine innate immune system. “She has made major discoveries in understanding how foreign DNA is sensed in the cell, and how this and other products of infection trigger inflammation,” writes Douglas Green, chair of the department of immunology at St. Jude, in an email to The Scientist.

Kanneganti’s team has generated multiple disease models in mice, probing the function and development of inflammasomes. In 2013, she demonstrated that the cytokines interleukin (IL)-1α and IL-1β regulate inflammation through different pathways, and that blocking a kinase that ramps up IL-1α production could prevent mice from developing a version of the skin disorder neutrophilic dermatosis.1

The following year, Kanneganti linked changes in the composition of intestinal bacteria in mice to the likelihood of genetically susceptible individuals developing an auto-inflammatory bone disorder.2 Dietary changes affected both gut community composition and production of IL-1β in neutrophils, providing a possible mechanistic explanation.

In 2015, Kanneganti and her colleagues published work exploring the role of the protein AIM2 in colorectal cancer. The protein was initially found to be a tumor suppressor in human melanoma cells, but Kanneganti’s lab discovered that AIM2 protected mice from colon tumor formation, both by controlling intestinal stem cell populations and by helping maintain the gut microbiota.3

“It’s been a great pleasure to watch Thiru achieve what she has,” says Doherty. “We all look with a certain amount of wonder to see what she’s going to do next.”