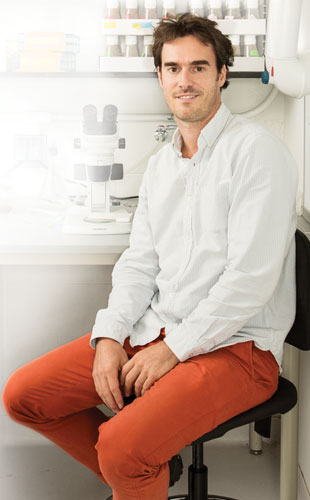 © DUSTIN FENSTERMACHERThose who want to study living systems generally major in biology. But Thomas Gregor’s path first took him through math and physics. Only after completing a master’s degree in theoretical physics at the University of Geneva did Gregor return to his core interest: understanding the fundamentals of how life works.

“Thomas started as a theorist, but has transformed into a scientist who pushes our ability to measure the biological system he studies farther than anyone,” says one of Gregor’s graduate advisors, Princeton University theoretical physicist William Bialek.

METHODS: That biological system is the Drosophila embryo, introduced to Gregor by another of his PhD advisors at Princeton, Eric Wieschaus, a developmental biologist. Gregor recognized that the biology of early fly embryos was qualitatively well understood, but was ripe for a thorough investigation from a physical perspective. Under the guidance of three advisors spanning theoretical physics, developmental biology,...

Most recently, Gregor’s lab discovered that Drosophila development appears to be precise at the level of mRNA, despite random pulses of transcriptional activity in individual nuclei, a feature that may be common to all organisms. Gregor observed that mRNAs diffuse evenly throughout the cytoplasm shared by all of the cell nuclei during the early development of a fly embryo, when nuclear division occurs without cell division.4

While theorists may dabble in experiments, they don’t typically become leaders in precise and sensitive measurements, says Bialek. “Thomas is doing this on several levels in both Drosophila and Dictyostelium.”

“Thomas’s unique view, and what distinguishes him from a lot of biologists, is his belief that quantitative data from accurate measurements can lead to biological truth,” says Wieschaus.