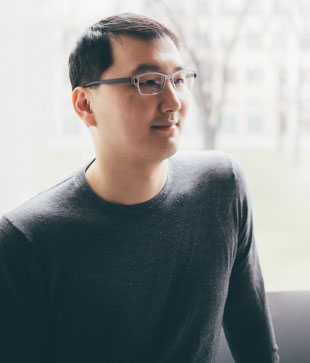 © MATT KALINOWSKITimothy Lu has straddled different worlds nearly his entire life, having spent the first half of his childhood in the U.S. and the second half in Taiwan. Academically, his experiences have been just as varied. Lu has studied electrical engineering, computer science, synthetic biology, and medicine. This stew of experience has made him into something of a Renaissance bioengineer—a researcher with computational skills, genetics know-how, and clinical knowledge to guide his pursuits. “He has a very unusual background,” says Yoel Fink, director of MIT’s Research Laboratory of Electronics. “There are not many people who have done what he’s done.”

As an undergraduate and master’s student, Lu studied electrical engineering and computer science at MIT, but he got the sense that the big problems in those fields had already been solved. At the same time, around 2003, synthetic biology was blossoming, and Lu wanted in.

On top of that, Lu was also working toward his medical degree at Harvard. His motivation to study medicine stemmed from wanting to find applications for his research. “I was intrigued with the ability to modify cells to treat disease,” Lu says. “But I didn’t have insights into real problems facing people in clinical settings.”

In 2010, MIT hired Lu as a faculty member straight out of medical school. Since then, his lab has swelled to about 26 members working on a variety of synthetic biology problems—from basic unknowns, such as how genetic networks control cell functions, to applied concerns, such as bacterial infections. One of the big interests Lu gained from medical school was the problem of antibiotic resistance, and among his current projects is one to develop rapid diagnostics to aid in identifying appropriate narrow-spectrum treatments.

In 2013, Lu founded another startup firm, called Synlogic, to test the ability of engineered microbes to treat infections. That same year he published work describing living cells’ utility as mini tape recorders.2 And last year, Lu’s team built a high-throughput method to assess the effects of different combinations of microRNAs.3 “I think he’s got one of the most remarkable—if not the most remarkable—programs in synthetic biology,” says Collins, now based at MIT.

Fink says Lu is a thought leader in synthetic biology, and his scientific creativity, pursuit of interesting problems, and ability to motivate and collaborate with others has helped him succeed in academia and business. “All this you put together and you find one of these amazing people that just are nearly perfect in everything they’re doing.”