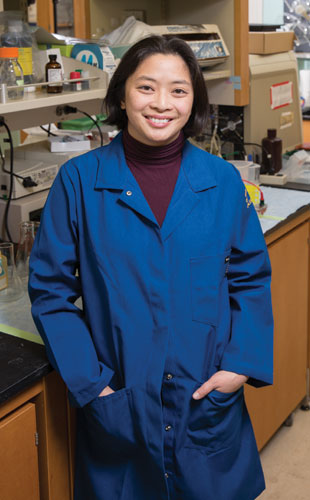 © JOHN DAVIS PHOTOGRAPHYValerie Arboleda traces her love of research back to time spent in a lab as an undergraduate at Columbia University. “I think I was a little bit lucky, in that early on there were a couple of fun experiments that just worked,” she says. While working on a project examining cerebral ischemia, she was able to use qPCR to confirm that microRNAs had been transfected into cultured mouse neuronal cells and successfully knocked down a targeted gene. This motivated her to further investigate the biology behind this experiment, Arboleda recalls. “I kind of got hooked after that.”

At the time, however, Arboleda wasn’t convinced a career in research was practical, and after graduation, she opted to study medicine at the University of California, Los Angeles (UCLA). But her love of the lab lingered, and between her second and third years of med school, she did...

After earning her degrees, Arboleda started a UCLA residency in pathology that included a substantial research component. “She really was very engaged in her rotations, both intellectually and from the scientific curiosity perspective,” recalls Omai Garner, a pathologist with whom Arboleda worked regularly during her residency. Together with Garner, Arboleda spearheaded a study examining the types and quality of test results in the UCLA system that ended up in patients’ electronic medical records, drawing on statistical tools she’d used in earlier genomics work to crunch the numbers.2 “For somebody to take the initiative and to move [this kind of project] forward all the way through publication during their residency is very impressive,” Garner says.

During her transition from medical school to residency, Arboleda also worked with UCLA geneticist Stanley Nelson to investigate the KAT6A gene, which encodes a protein that acetylates the histones that package DNA. In 2015, the pair, along with more than a dozen colleagues, published the first description of KAT6A syndrome, a rare, congenital disease. The condition, which is caused by de novo mutations in KAT6A, results in a wide range of symptoms, including microcephaly, developmental delays, and cardiac defects.3

Since starting her own lab at UCLA’s School of Medicine last year, Arboleda has driven the work on KAT6A syndrome forward, using tools from computational genomics to explore the mutations’ downstream effects on chromatin folding and gene expression. Her team also continues to study the range of phenotypes associated with the mutations, and she finds it rewarding to meet families and patients affected by the condition and to give them an idea of what to expect over time. “I feel really lucky that someone pays me to do the work I do,” Arboleda says. “Every day I’m pretty excited to come to work.”