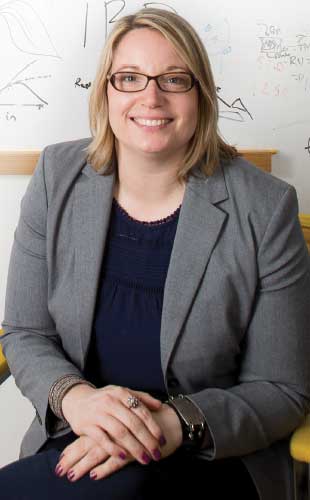 © JANE SHAUCK PHOTOGRAPHYValerie Horsley was surrounded by academics from a young age. Raised by a single mother who began her doctoral work in industrial engineering when Horsley was seven, she spent a lot of time with graduate students who served as her babysitters. When it came time for her to graduate from Furman University in South Carolina with a biology degree, Horsley knew she needed her own PhD to become a professor and stay in academia.

She opted for Emory University, where her lack of in-depth molecular biology background became apparent. Horsley’s undergraduate career had been wide-ranging but not marked by copious research experience. “I felt completely overwhelmed,” she says. “But I think it actually helped me, because I learned to think broadly before I started thinking about specifics.”

Horsley joined the lab of Grace Pavlath, where she explored the role of a transcription factor called...

For her postdoc, Horsley wanted to move out of muscle and into a different tissue, so she joined the Rockefeller University lab of Elaine Fuchs and dove into skin. One of her projects started with another transcription factor, Blimp1. When she knocked out the gene that encoded Blimp1, mice got oily skin. It turned out that Blimp1 was regulating the size of the sebaceous gland.2

See “More Than Skin Deep,” a profile of Elaine Fuchs

In 2009, Horsley set up her own lab at Yale University. Among several lines of inquiry, including characterizing the stages of keratinocyte specification and understanding adhesions between these epidermal cells, she’s been collaborating with her husband, Yale’s Matthew Rodeheffer, on the role of adipocytes in hair growth. They found that in the skin, adipogenesis occurs in parallel with the growth of hair, and regresses when hair follicles die.3 Although she wasn’t sure at first whether she wanted to collaborate with her husband, the partnership yielded an entirely new appreciation for fat cells in hair growth. “No one had looked at it before,” says Horsley. “It’s pretty much what my lab has been working on since.”

Horsley earned tenure last year. Away from the bench, she has been a leader in her department, and beyond. Yale’s Thomas Pollard, who helped hire Horsley, says that shortly after Horsley joined the university she began expanding the regular junior faculty lunches to other biology departments. Then she reached out to chemistry and physics PIs; then to all of arts and sciences, and eventually to the medical school as well. “No one asked her to do this. She just recognized that it was a good idea,” says Pollard. “This is not an exceptional thing for her to do. She does this all the time.”