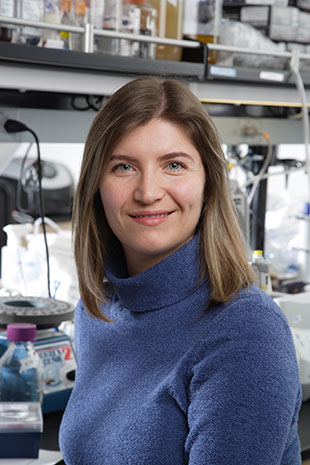 Photo © JIM CORNFIELDViviana Gradinaru spent her early childhood in a village of fewer than 100 subsistence farmers tucked into the countryside of northeastern Romania. Her family stressed the importance of education, whether in a classroom or in the hills outside her grandparents’ tiny village. “It was extremely enlightening in terms of freedom of play,” she recalls. Gradinaru’s interest in the natural world led her to study physics at the University of Bucharest, but she came to realize that she’d have more opportunities for experimentation abroad. So she transferred to Caltech in her second year to study biophysics in a neuroscience lab.

For graduate school Gradinaru joined the lab of Stanford University’s Karl Deisseroth because of his interest in developing neuroscience tools. “I left Caltech with this need to be able to control cell types in intact tissue,” she says. Deisseroth’s lab was beginning to develop optogenetics, and...

Along the way, Gradinaru worked on a problem with trying to inhibit neuronal activity: the opsins, light-sensitive proteins that are the workhorses of optogenetics, would sometimes clump and damage cells. Though it was only a year-long detour en route to her PhD, the solution Gradinaru came up with is now fundamental to optogenetics, says Deisseroth. “She found a short amino acid motif to stick on the protein and get it to go to the right place,” he says.1 Now, he adds, every lab doing optogenetics uses that motif.

Gradinaru showed that the effects of DBS in the Parkinson’s brain were happening at cells’ axons, not their cell bodies as many had assumed.2 The results made it clear to Gradinaru that the manipulation of neural circuits in therapy was important, and led her to continue working on brain mapping as a staff scientist in Deisseroth’s group after she earned her degree.

In 2010, as she was finishing her thesis work, Gradinaru launched an entirely new project with Deisseroth with the goal of creating see-through tissue to enable visualization of neural circuits. Collaborating with a chemical engineer, Gradinaru succeeded in the initial development of a tissue-clearing approach now called CLARITY. After moving to Caltech as an assistant professor in 2012, she advanced tissue clearing with a protocol that relies on the body’s own circulation to transport the clearing agents, rather than on bathing the tissue.3 This made it possible to render whole organs or even organisms transparent.

Gradinaru says both the opsin and tissue-clearing technical improvements resulted from a “respect for biology”—understanding the physiology of the cell or organism. “The idea is you could use what the biological system already has and amplify that or recruit it for the system,” she says. The techniques support Gradinaru’s ultimate ambition of understanding neural circuits and their role in disease, and perhaps manipulating them to ward off neurodegeneration. Doris Tsao, Gradinaru’s Caltech colleague, says: “She’s unique in that she’s not just a tool developer, but she’s trying to apply it to understand various psychiatric disorders.” 