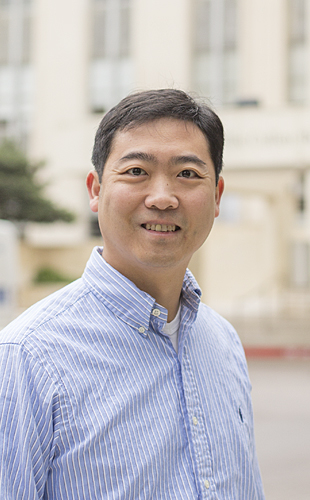 © JILL HUNTERWeiwei Dang attended Peking University in his hometown of Beijing, China. Having taken a liking to science in high school, he spent a year working in the lab of molecular biologist Bing-Gen Ru developing a method to test the concentration of metallothionein in rabbits as an indicator of environmental levels of heavy metals. By the time he graduated in 1999, he knew he wanted to pursue a career in the lab, and “at the time, it was everybody’s opinion that the U.S. is at the very forefront of biomedical research.” So he headed to Southern Illinois University in Carbondale, and there he spent a graduate rotation in the group of biochemist Blaine Bartholomew, who introduced him to chromatin and epigenetics.

In Bartholomew’s lab, Dang interrogated the interactions between the chromatin-remodeling enzyme ISW2 and nucleosomes. He mapped the DNA locations on the nucleosomes where the enzyme made...

Dang was hooked on chromatin biology. As he wrapped up his PhD work, he began scoping out potential postdoc advisors at meetings, and was fascinated by a presentation given by Shelley Berger, now director of the Epigenetics Program at the University of Pennsylvania’s Perelman School of Medicine. In March 2006, Dang joined Berger’s lab, then at Philadelphia’s Wistar Institute, where, among other projects, he launched into studying the role of epigenetics in aging. Dang purified young and old yeast cells, then applied available antibodies for assaying histone modification to test for changes that occurred during aging. Among the differences he and his colleagues found was increased acetylation of the lysine-16 (K16) residue on the tail of histone H4.

Looking more closely, he and his colleagues found that the enzyme Sir2, a known aging regulator in yeast, deacetylates K16, and that Sir2 levels decrease in older yeast cells. Meanwhile, acetylation increases in the subtelomere region, between the telomeric caps themselves and the chromatin, which correlated with fewer nucleosomes.3 “Basically, what it suggests is the more acetylation you have, the more loose the chromatin fiber becomes,” Dang says. Finally, he found that altering K16 acetylation can affect life span: less acetylation leads to longer-lived yeast. “I think [the study] has had a really big impact on the [aging] field,” Berger says.

Now in his own lab at Baylor College of Medicine, Dang continues to study the role of Sir2 and other epigenetic factors in aging. His group is also conducting screens for overexpressed genes that affect life span, using a high-throughput method Dang mastered and streamlined in Berger’s lab. His lab is also moving into mammalian model systems, hoping to apply what his group learns in yeast to mammalian aging using mesenchymal stem cells.