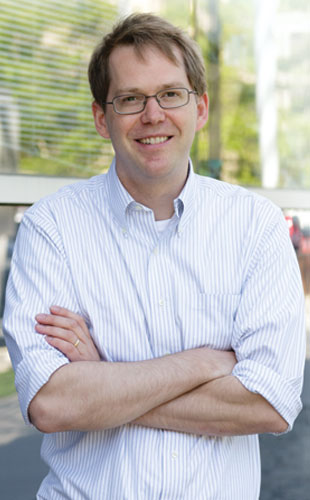 © PAUL SIMCOCKWilliam Greenleaf has been at the forefront of life-science tool design since grad school, building a new type of DNA sequencer and pushing genomics technologies to unprecedented limits.

“Biology is becoming more of a playground for cross-disciplinary work, which is very exciting, because in the end, human biology is incredibly complicated,” says Greenleaf. “Now we finally have the tools to match some of that complexity.”

As a Harvard University physics major, Greenleaf applied his training to biological questions. During the summers, he worked in the laboratory of Julio Fernandez, then at the Mayo Clinic in Rochester, Minnesota, using atomic force microscopy to detect structural changes in proteins at the single-atom level.

Greenleaf went on to do a PhD at Stanford University in biophysicist Steven Block’s lab. There, the young grad student was able to measure, at the single-molecule level, the energy and forces required...

Using an optical trapping system they developed, Greenleaf and fellow graduate student Elio Abbondanzieri also measured the movement of RNA polymerase along DNA, from one base to the next, to within one diameter of a hydrogen atom.2 The work “is arguably the world’s record holder for the most-sensitive displacement measurement ever made on a single protein,” says Block.

This technique led Greenleaf and Block to demonstrate that base pair–resolution measurements can be used to sequence DNA directly.3

“Never before had a graduate student in my lab managed the perfect trifecta—publication of a paper in Nature, Science, and Cell; a quadfecta, actually, since he also published a paper in the top physics journal, Physical Review Letters,” says Block. “For a biophysics researcher, that is as good as it gets.”

Now in his own lab back at Stanford, Greenleaf is taking apart old DNA sequencers to rebuild them for new high-throughput genomic assays and studying chromatin at the single-cell level. Greenleaf’s lab has developed a relatively quick method to identify open chromatin regions genome-wide using hundreds- to thousands-fold fewer cells than required by current technologies.4 The method, says Greenleaf, opens the door to epigenomic analyses on clinical timescales: just one day.

Greenleaf is showing that single-molecule methods can be scaled to measure thousands of molecules at a time, says Block. Howard Chang, a genomics researcher at Stanford University who collaborated with Greenleaf on the open chromatin assay, agrees. “What makes him unique is his strong physics bent—he always brings quantitative thinking to scientific problems and has a good intuitive sense of the single-molecule level and how that scales,” says Chang.

“I look forward to something extraordinary from him in the future,” adds Xie.