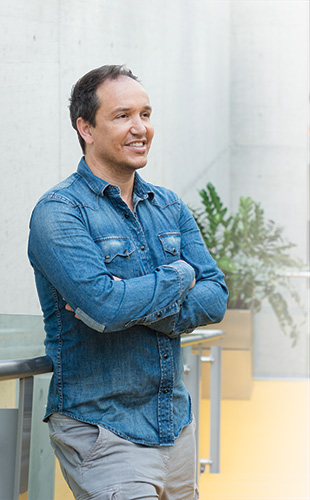 © HANS HOCHSTÖGERGrowing up in Morocco, Youssef Belkhadir would look out across the wheat fields of his father’s farm outside Casablanca in wonder. “I was fascinated by how plants managed to colonize the environment in such an elegant way, making the most of everything,” Belkhadir tells The Scientist. “They are tethered in the ground and cannot escape their environment through locomotion. Their site of birth will be their site of death, and they have to deal with whatever comes their way.”

After earning his PhD in 2005, Belkhadir joined the lab of biologist Joanne Chory at the Salk Institute for Biological Studies in La Jolla, California, as a research associate, to study how plants respond to steroid signals. “What Youssef learned in my lab was how to take a lot of knocks, and still move forward,” Chory says. “At first, all of his projects failed, not because they were bad projects, but they just didn’t work. Youssef just seemed to laugh through it all.” Finally, success came while studying a leucine-rich repeat receptor kinase (LRR-RK), which acts as an antenna at the cell surface to bind to a steroid hormone that helps plants control their size.2 “I got my affinity for cell surface receptors in Dr. Chory’s lab,” Belkhadir says. “But I didn’t just want to study one at a time. I wanted to study hundreds at a time.”

At the end of 2010, Belkhadir planned to tackle this problem as an independent researcher at the Centre of Excellence in Plant Energy Biology in Perth. But he never made it to Australia. While he was in California, tragedy stuck: Belkhadir found out that his father had been in a traffic accident, so he returned to Morocco to be with his family. After his father passed away, Belkhadir remained in his native country to settle his father’s affairs, which kept him away from the lab bench for more than three years.

To stay engaged in science, Belkhadir cofounded a biotech company called Atlas Genomics with his own money—a venture he says taught him to be excruciatingly efficient and to outsource tasks when necessary. After a few years, however, Belkhadir chose to shut down the firm for financial reasons, partly related to the Arab Spring demonstrations that raged through 2011. It was time to return to the lab. “It’s incredibly hard to come back after years away,” Chory says. “But Jeffrey Dangl and I went to bat for Youssef because we knew he could do it.”

When Belkhadir resumed his research in 2014, he accepted a position as a group leader at the Gregor Mendel Institute in Austria to study how plants use cell surface receptors to adapt to their environment. Just a few years later, he had successfully completed several projects: three identified the peptide ligands of three independent classes of receptors that regulate the output of plant immune responses, and another identified a receptor that ensures healthy root development. Simultaneously, Belkhadir and his colleagues developed the tools to trace 40,000 interactions among 200 LRR-RKs and discovered a complex network of surface receptors that distinguishes friendly extracellular molecules from pathogenic ones.3

Now, Belkhadir says, the question is: When multiple signals activate the network, how do plants compute the signals to make the best decisions to defend themselves or grow?