Although originally trained as an architect, Irving Geis dedicated his life to creating images of molecules that taught viewers about their structure and function. Beginning in 1948, Geis illustrated scientific concepts for Scientific American—a job that eventually led him to create a now-iconic illustration of the first protein structure solved by X-ray crystallography, that of the sperm whale myoglobin, for the magazine in 1961. An illustration of lysozyme, the first enzyme structure solved, followed myoglobin in 1966. Geis collaborated with biochemist Richard Dickerson—who also helped decipher the structure of myoglobin—on three books, including 1969’s The Structure and Action of Proteins. In addition to his molecular work, Geis gained a new generation of fans when he showed off his mischievous humor by illustrating Darrell Huff’s How to Lie with Statistics. 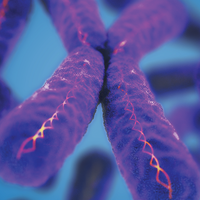