Nick Dall lives in Cape Town, South Africa. He is fascinated by culture, history, the environment and their intersection. His journalism has been published in The Guardian, the BBC,... 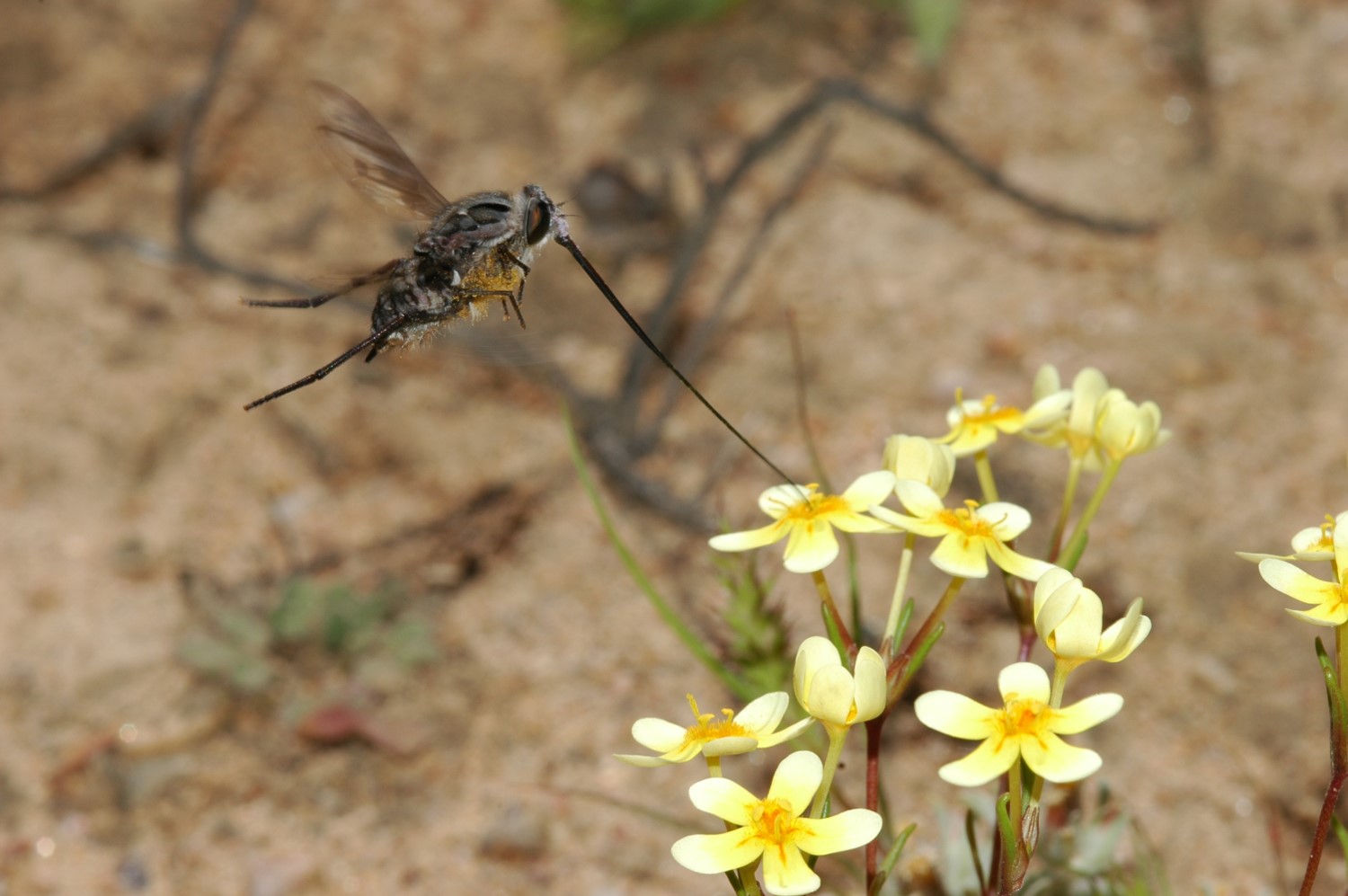 Until recently Prosoeca peringueyi (pictured below), an otherworldly little creature with a needlelike tongue almost twice the length of its body, was thought to play a vital role in the reproduction of at least 28 plant species in Namaqualand, an arid region extending for hundreds of kilometers along the west coast of South Africa. Because the nectar of such long-tubed flower species is hidden away so deeply, conventional pollinators such as bees ignore them.

P. peringueyi, which is 16–21 mm long, is one of at least a dozen long-tongued species of the Nemestrinidae family of true flies (Diptera) that are endemic to southern Africa. (In all other parts of the world, Nemestrinidae have short tongues.) Around four of these fly species are found in Namaqualand, and they each tend to specialize on certain plant species and/or regions. 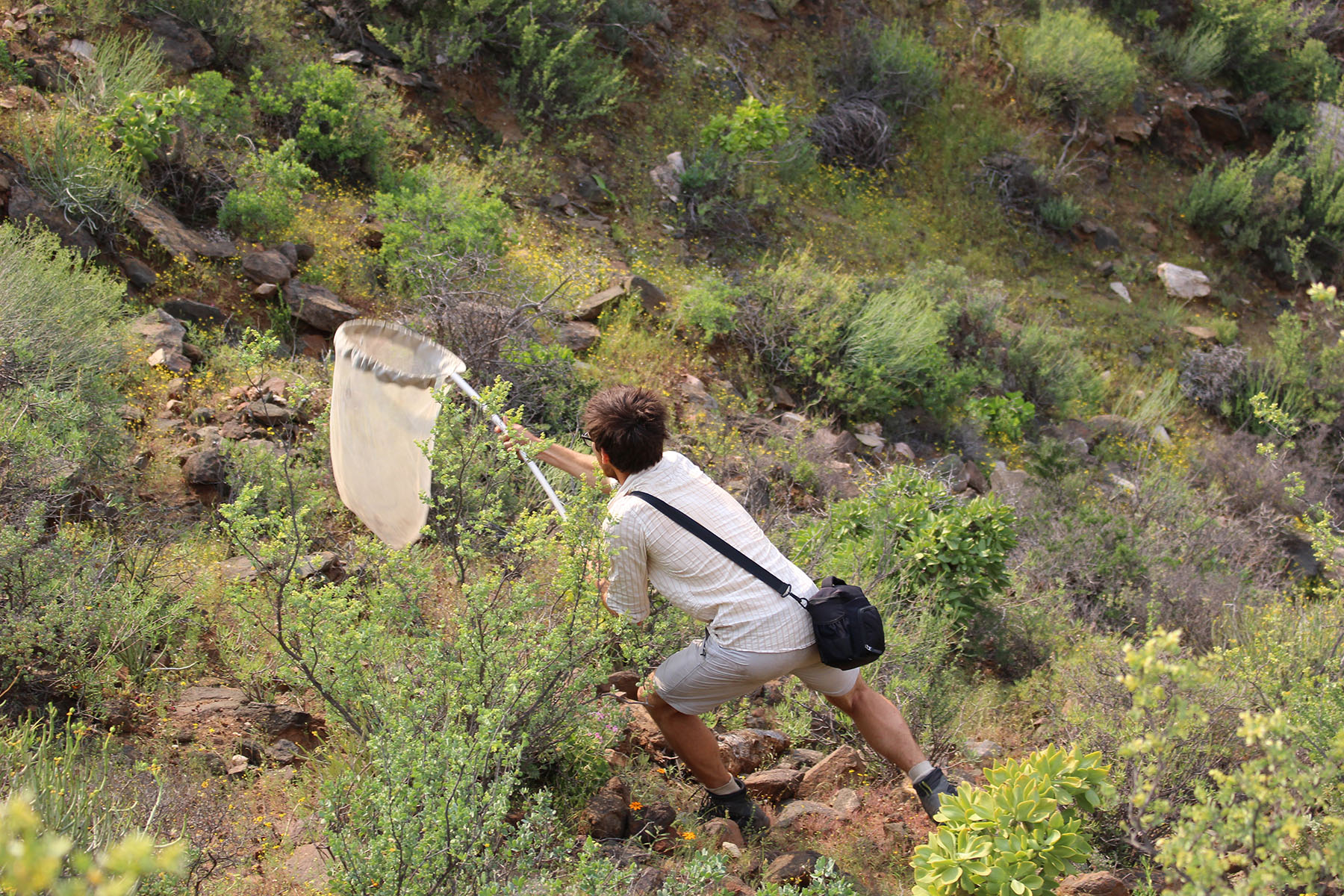 The story of P. peringueyi took an exciting turn recently thanks to research by Florent Grenier (above), a botanist at the University of Montpellier in France and Stellenbosch University in South Africa who has been studying the flies as part of his PhD research. Between 2016 and 2018, Grenier spent four months of every year in the field, observing and capturing flies from almost 150 different populations of the insect.

“Based on my field observations of tongue length, I was already fairly convinced that P. peringueyi was two separate species,” explains Grenier. “The distribution of tongue length, across many localities, was clearly bimodal. And I ruled out polymorphism by observing that mating pairs of flies always had tongues of similar length.” 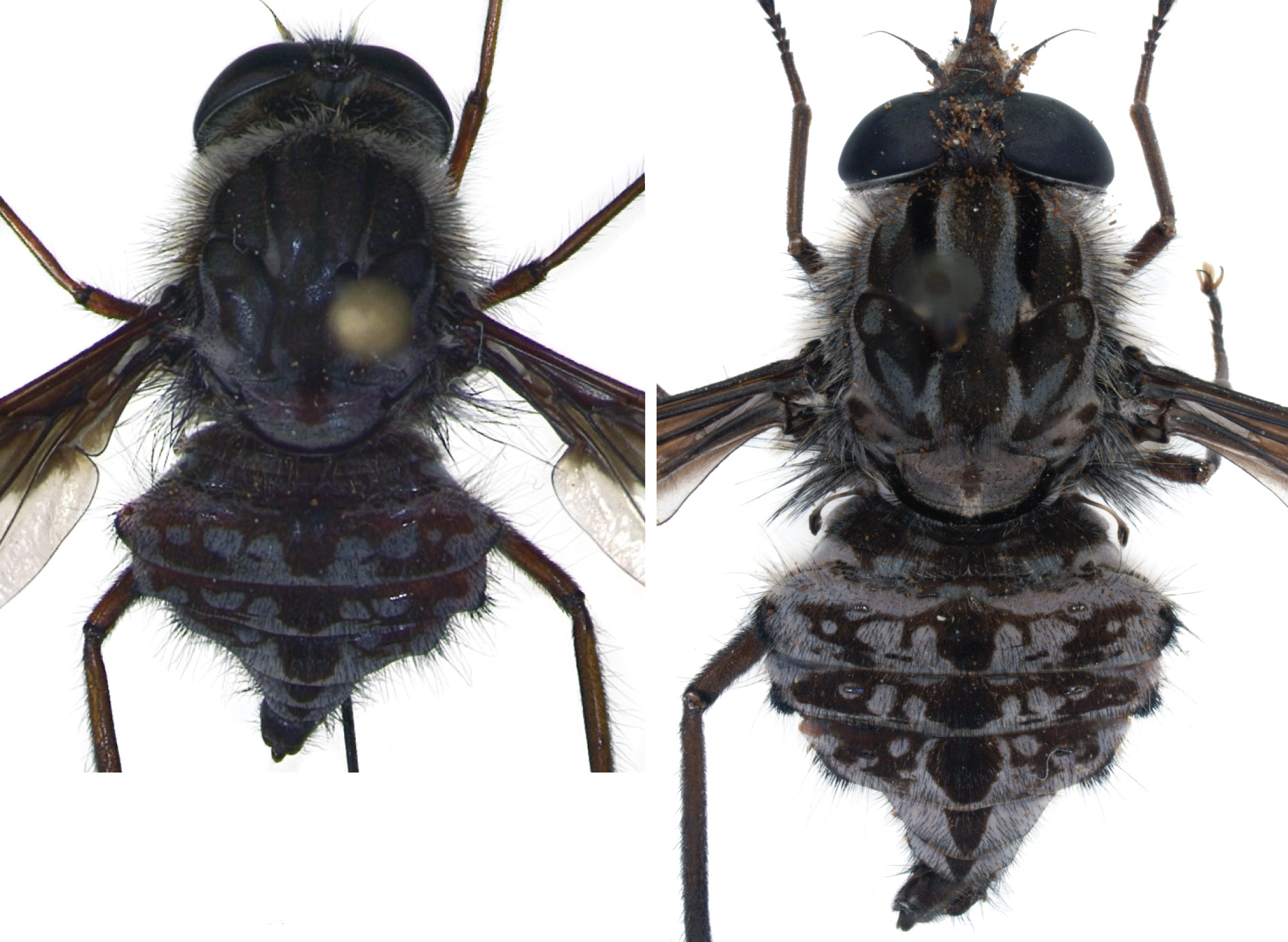 Grenier sent some of his fly samples to entomologist Genevieve Theron, who was then working on a PhD of her own at the University of KwaZulu-Natal and Stellenbosch University. After an initial examination of all the flies Grenier had sent her, Theron performed a detailed study of 64 specimens across 13 sites. “We did the genetics first, and we found two clear groupings,” explains Theron. “When we looked under the microscope, there were also clear morphological differences beyond tongue length.” In 2020, Theron officially named a new species, Prosoeca torquata (left, above), to distinguish it from P. peringueyi (right).

“Torquata” means ringed or collared in Latin. As Theron describes, the new species has “a white band of . . . hairs on the anterior of the thorax and on the face that is absent in P. peringueyi.” P. torquata also “has a darker thorax than P. peringueyi and a proboscis that is only slightly longer than the body.” Additionally, there are “clear differences in the morphology of the genitalia, which is usually a good indication for entomologists that two species are distinct.” 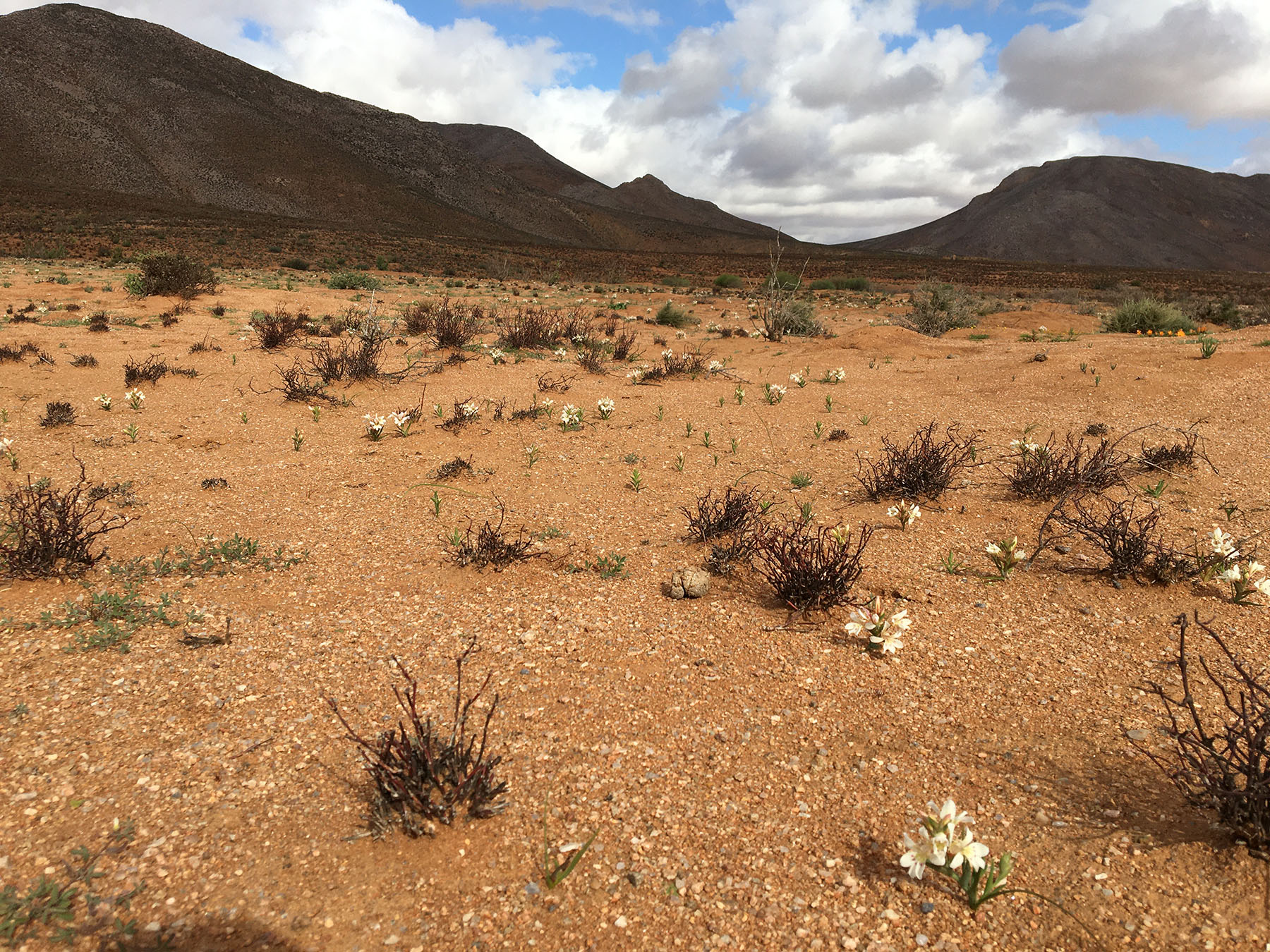 The discovery of the new species does not come as a surprise to Michael Kuhlmann, an entomologist at Kiel University in Germany who has studied Namaqualand’s wild bees for more than 20 years.

“Namaqualand is a global hotspot for pollinator diversity, and there simply aren’t enough scientists to study it,” says Kuhlmann. “There are literally hundreds of pollinating insect species still waiting to be described.” On this point, Theron tells The Scientist that she expects to describe an additional three or four Prosoeca species from the specimens Grenier sent her.

Grenier’s work has also led to botanical discoveries: thanks to his observations in Namaqualand, the number of plants known to be visited by P. peringueyi and/or P. torquata (above) has jumped from 28 to at least 42.

Now that it’s known that there are two fly species, researchers can study the pollination of long-tubed flower species with fresh eyes. A recent paper by Stellenbosch University researcher Anton Pauw and colleagues found that while both fly species visit Pelargonium incrassatum, P. torquata is far more prevalent in the areas where the plant is found, making it a more important pollinator in this case. Pauw and colleagues write in their paper that they had instead expected P. peringueyi to be the primary pollinator, as its longer proboscis matches the flowers’ tube length almost exactly. Theron says that the findings highlight the importance of doing detailed studies on long-tubed flower species in the region to understand exactly which flies are pollinating which flowers. 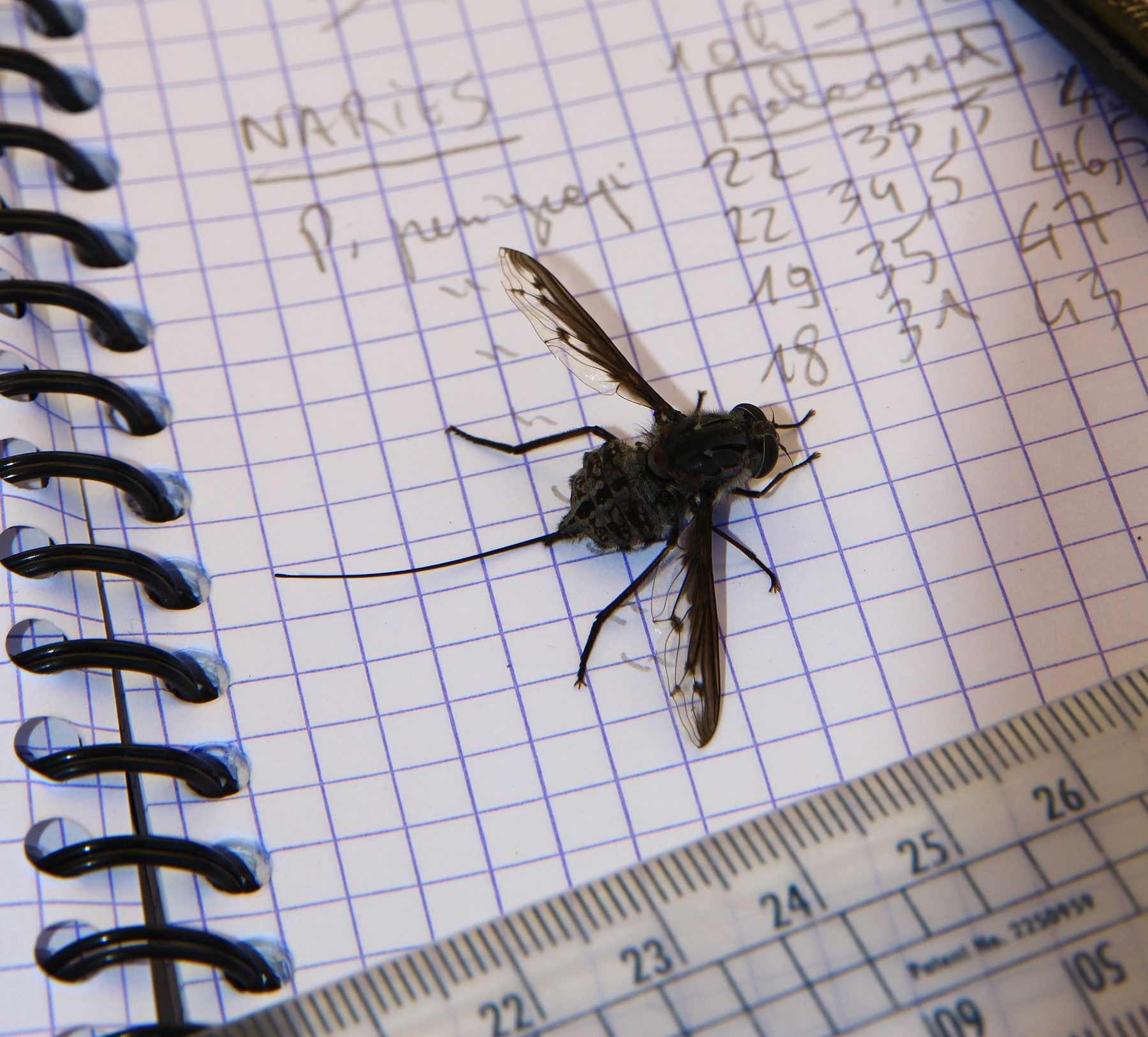 The discovery of P. torquata is a reminder of how little scientists know about the plant-pollinator relationships in Namaqualand, says Kuhlmann. When it comes to understanding the life cycles of P. peringueyi and P. torquata, it can only be assumed that they reproduce in a similar fashion to Trichopsidea costata, the only long-tongued nemestrinid in southern Africa whose life cycle has been studied. A parasitoid, T. costata lays its eggs on organic matter, and when these hatch, the larvae climb onto and burrow inside the brown locust (considered a pest by farmers) and gradually eat it from the inside. “We think something similar is going on with P. torquata and P. peringueyi,” says Theron. “But we can’t say for sure.” 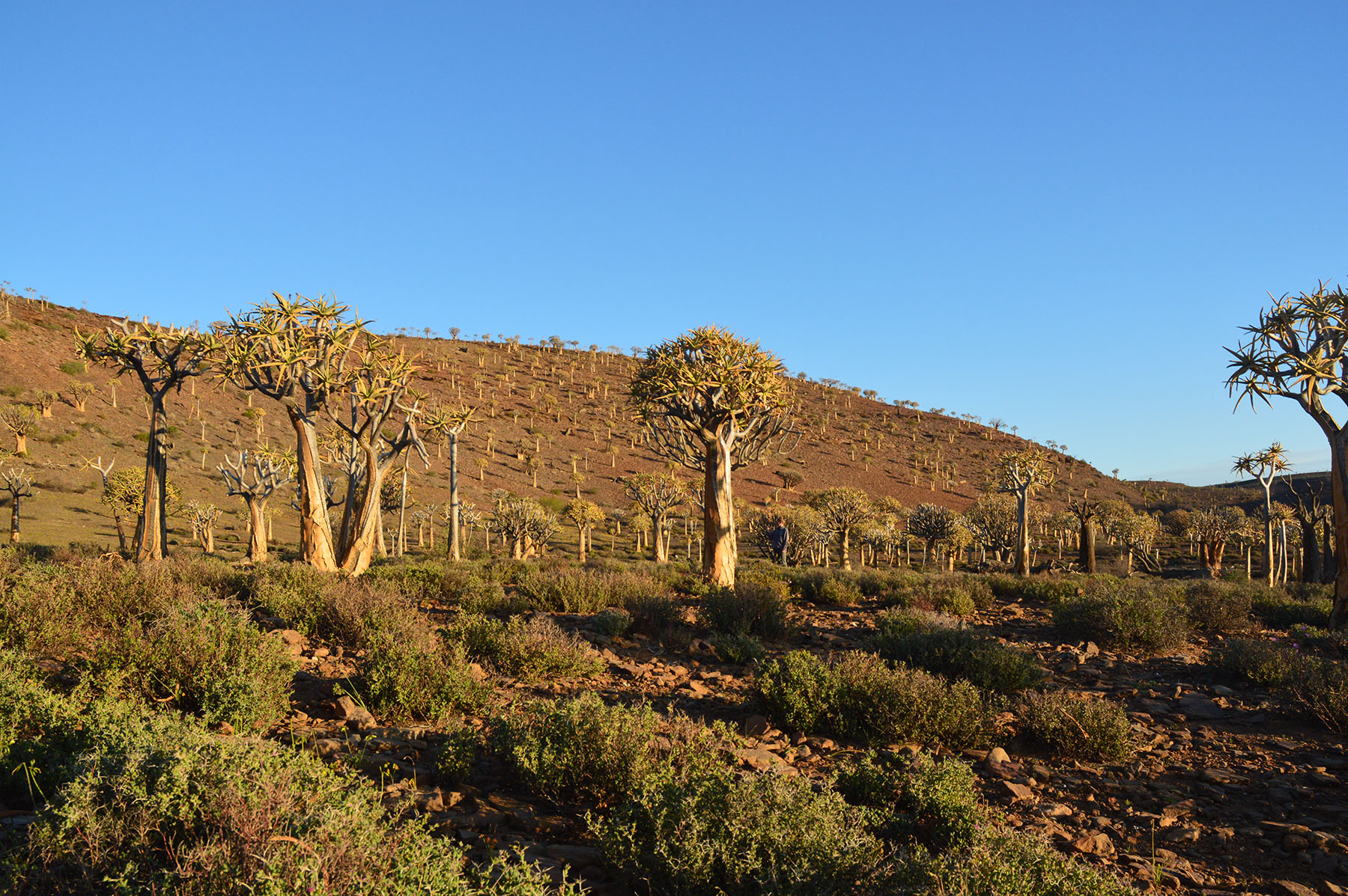 Climate change and habitat loss have hit Namaqualand particularly hard. “One of my biggest fears,” says Kuhlmann, “is that we will lose lots of species, and their specialized pollination relationships, before we even know that they exist.”

As for conserving the endemic plants and insects of Namaqualand, “the only answer is to conserve the habitat,” he says. “It’s a vast area with thousands of species. . . . This new fly is the ‘Lion King’ or the ‘elephant’ of Namaqualand insect species, and it’s great that it gets picked up by the media. But there are also hundreds or thousands of others that don’t get a mention. We need to use discoveries like this to showcase Namaqualand’s incredible diversity before it’s too late.”