Scientists have been studying how animals perceive and respond to sound for decades, but it’s only recently that they’ve started applying that research to individuals still in the egg or womb. Now, researchers are finding that embryos are able to use sounds and other vibrations to glean information on their postnatal environment and influence their own development. In addition to abiotic factors, such cues can tell embryos about the presence of predators or competitors, sometimes leading to lifelong changes in the animals’ physiology and behavior. This phenomenon has been documented across the animal kingdom, from insects to mammals, and new research on premature babies suggests that humans are no exception.

Neotropical glass frogs (family Centrolenidae) engage in extensive parental care, with the male frog keeping the eggs moist and fending off predators. Somehow, glass frog embryos are able to distinguish between the signals of father and foe, and researchers believe the cue is likely vibrational. When a predator approaches, the tadpoles can hatch spontaneously in an attempt to escape, even before they are fully developed. This trick comes with an evolutionary trade-off, however, as tadpoles that hatch prematurely are less efficient swimmers and are at greater risk of being eaten by fish.
JESSE DELIA

In this video, red-eyed treefrog (Agalychnis callidryas) embryos, another neotropical frog species with the ability to hatch prematurely in the face of predation, escape the jaws of a parrot snake (Leptophis ahaetulla).
COHEN ET AL., J EXP BIOL, 2016 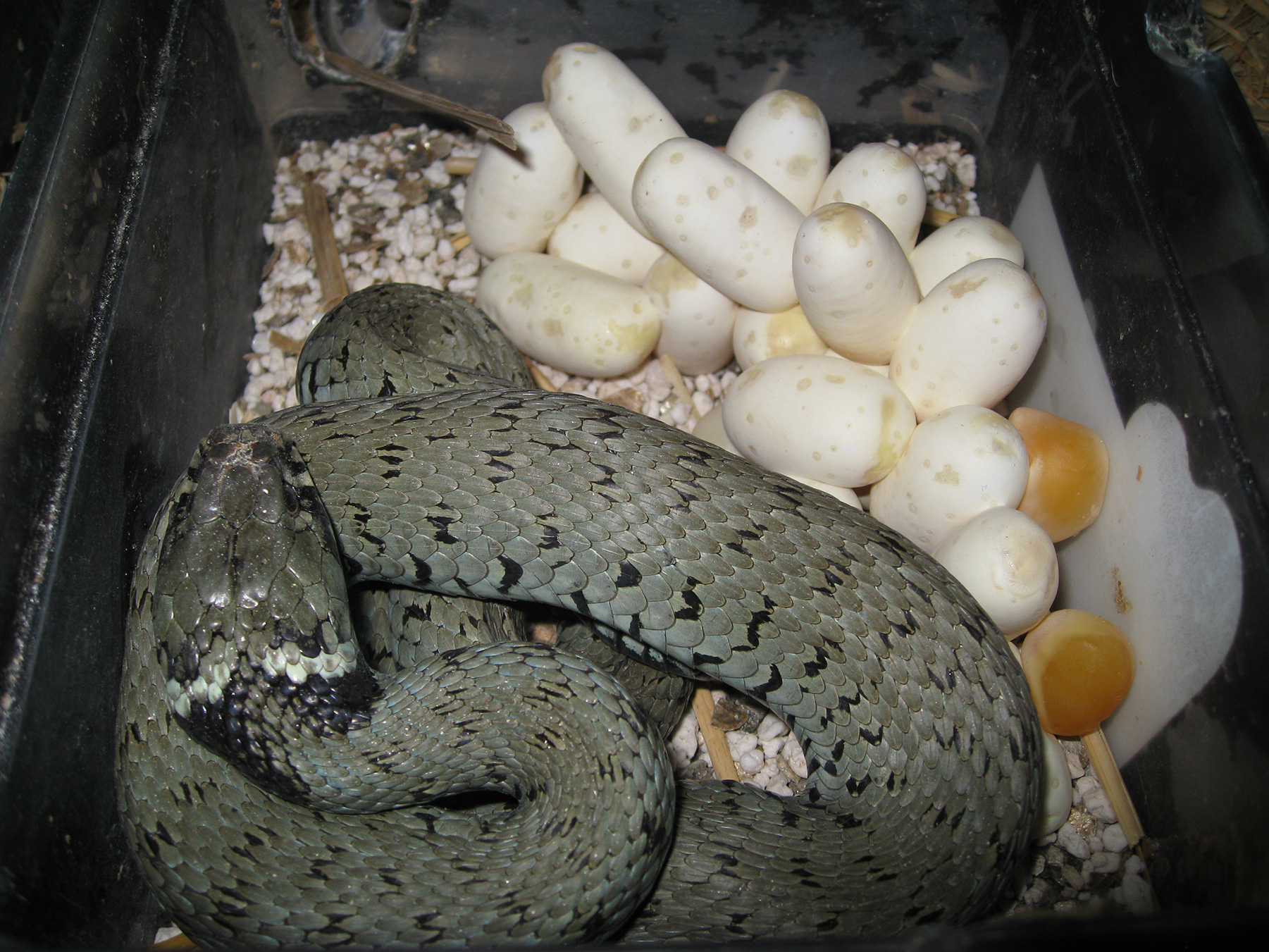 Some species synchronize their development and hatching with that of their siblings to overwhelm would-be predators. Female water snakes (Natrix maura) often lay their egg clutches in hollow logs and cavities with other clutches, which often hatch together despite differing in age.
GAËLLE BLANVILLAIN

Researchers at the French National Centre for Scientific Research borrowed technology from the poultry industry to monitor the heart rates of embryos in artificial clutches with two sets of eggs that differed in age by six days. They found that the younger snakes can sense the heartbeats of older individuals nearby and increase their own to accelerate their metabolism, and often forego sleep—both changes that could help them catch up to the embryos that were laid earlier. Like the glass frogs, young snakes that develop more quickly are less efficient swimmers after hatching.
JÉRÉMIE SOUCHET; FABIEN AUBRET

In some insects, including this shield big (Parastrachia japonensis), females will vibrate their egg masses to induce hatching. It helps the mother, who engages in extensive parental care, tend to her young if all are at roughly the same developmental stage, and it reduces cannibalism among siblings.
MUKAI ET AL., PLOS ONE, 2014 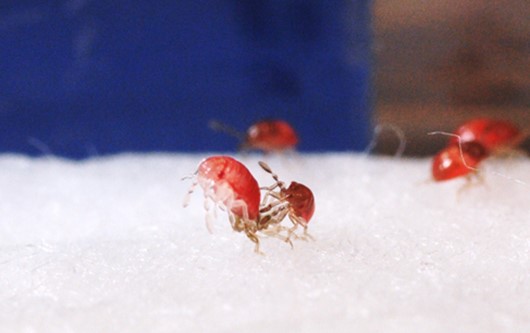 The closely related burrower bug (Adomerus rotundus) uses a similar strategy. When researchers allowed egg masses to hatch asynchronously without vibration, these A. rotundus nymphs cannibalized one another, with the younger nymphs (right) attacking their older siblings (left) just after their first molt, when they were vulnerable because their new exoskeletons had not yet hardened.
HIROMI MUKAI

The most detailed mechanistic studies to date have been carried out in birds. Researchers in Australia first noted in 2014 that zebra finches produce a form of vocal panting when exposed to heat. Although they sometimes make the call in the presence of other adults or when alone, they most often do it when incubating their young, leading researchers to suspect that the parents may be feeding information to their developing embryos.
MYLENE MARIETTE

Embryos that heard the calls experienced lifelong changes in their physiology and behavior, including reduced but more intense begging and slower growth after hatching. In addition, heat call–exposed birds sought hotter nests as adults, produced more fledglings during their first breeding season, and were more amenable to trying new foods than controls. Male finches that heard the heat calls before hatching learned a more diverse repertoire of calls that increased their reproductive success.
MYLENE MARIETTE

Yellow-legged gull (Larus michahellis) chicks have been shown to alter their development after hearing alarm calls from adults outside the egg that signal the presence of predators such as mink, according to researchers in Spain.
ALBERTO VELANDO AND JOSE NOGUERA 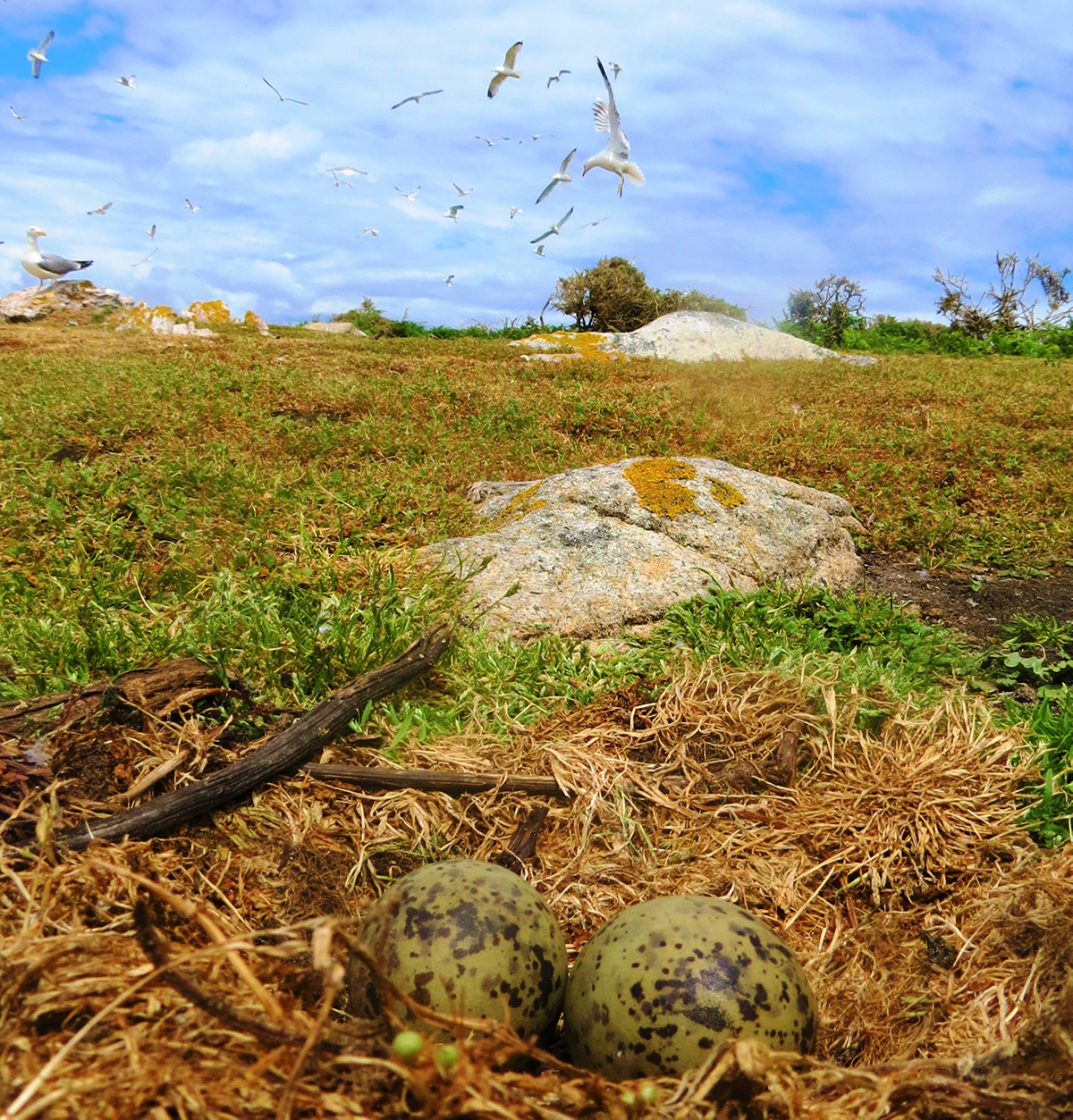 Chicks that heard the alarm calls as embryos had increased global DNA methylation, higher levels of the stress hormone cortisol, and fewer, smaller mitochondria (suggesting less energy production) compared with unmanipulated controls. In addition, chicks that heard the calls delayed their hatching and were quicker to crouch upon hearing the alarm call.
ALBERTO VELANDO AND JOSE NOGUERA 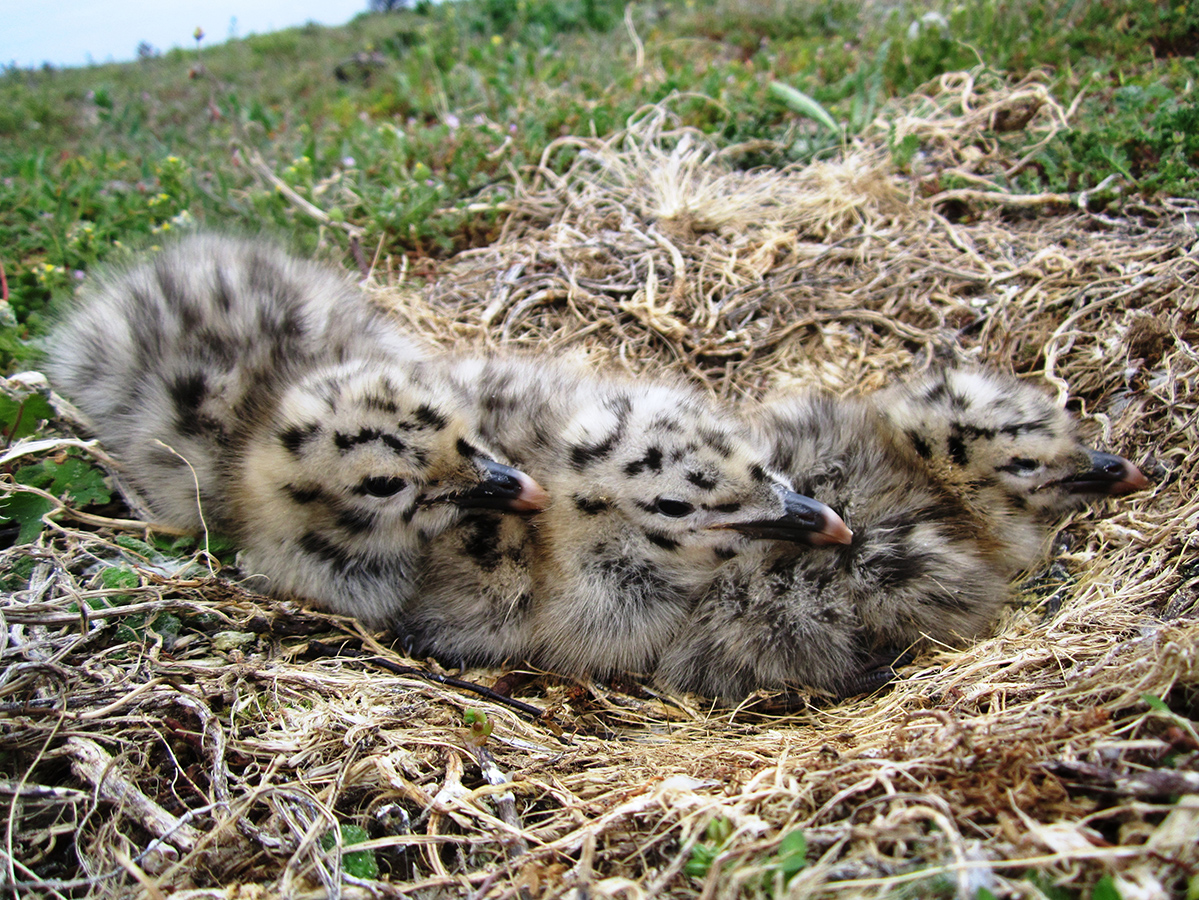 While still in the egg, call-exposed chicks vocalized less and vibrated more, perhaps to share information quietly. Indeed, in experiments where only two of three eggs were exposed to the alarm calls, all three chicks shared the same developmental and behavioral changes.
ALBERTO VELANDO AND JOSE NOGUERA

Evidence of the phenomenon in humans

In addition to studying how hearing the sounds of their mothers’ voices and heartbeats in utero can direct early brain development in human fetuses, scientists at the University of Geneva are probing the effect of music on brain development in infants who are born prematurely. Their results indicate that listening to music through headphones rather than just hearing ambient noise of the NICU may prompt the babies’ brains to develop more like those of full-term babies.
STEPHANE SIZONENKO

In one experiment, researchers partnered with an award-winning composer to create a series of soundscapes based on the instruments the infants preferred when they were waking up, alert and active in their incubators, or falling asleep. A subset of NICU babies listened to the music five times a week, while the other half did not. At the end of the experiment, the scientists compared the infants’ MRI results to those of healthy, full-term babies.
LORDIER ET AL., PNAS, 2019 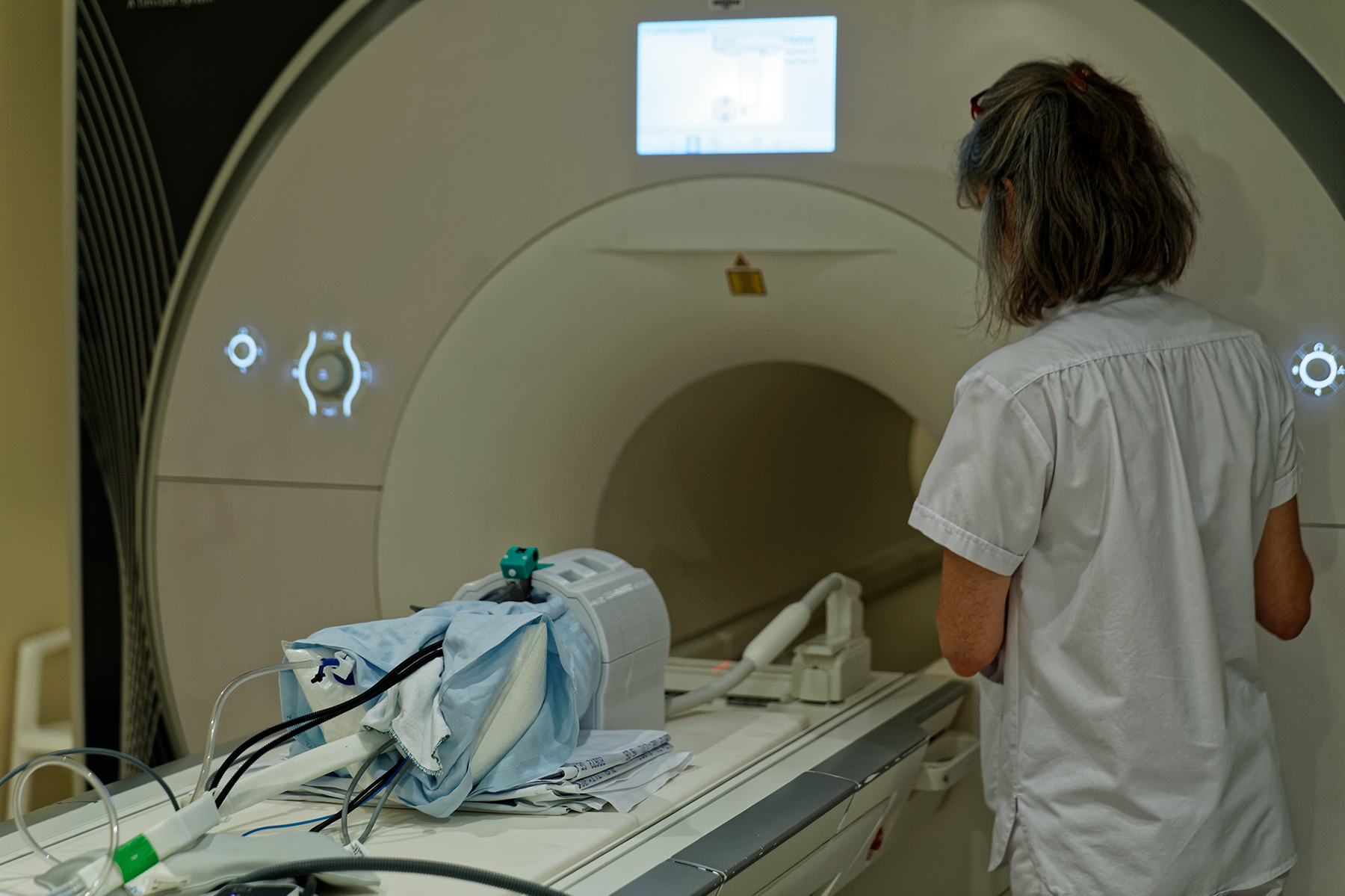