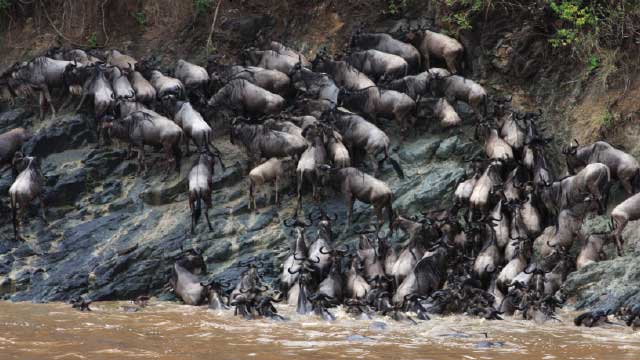 If every wildebeest was a penny, and you stacked the pennies, it would be two kilometers high. And those pennies are going to eat 4,000 to 5,000 tons of grass every day. That’s an enormous amount of biomass being consumed, digested, and redeposited in some way.

—Grant Hopcraft, landscape ecologist at the University of Glasgow, who studies wildebeest migration in order to understand the animals’ interaction with their ecosystems (The Scientist, August 15)

Listen to experts better qualified than you are. Especially scientists. Be guided by evidence and reason, not gut feeling. By far the best way to assess evidence is the scientific method. Indeed, it is the only way if we interpret “scientific” broadly. In particular—since the matter is so urgent and it may already be too late—listen to scientists when they tell you about the looming catastrophe of...

—Evolutionary biologist and author Richard Dawkins, when asked in a Scientific American interview what advice he would give to Donald Trump if he had the chance (August 10)

I’m simply stating that the distribution of preferences and abilities of men and women differ in part due to biological causes and that these differences may explain why we don’t see equal representation of women in tech and leadership.

—A memo, penned by software engineer James Damore, decrying what he calls “arbitrary social engineering” aimed at increasing workplace diversity at Google, which fired him after the document circulated first inside then outside the company (August 5)

It is impossible to consider this field of science without grappling with the flaws of the institution—and of the deification—of science itself. For example: It was argued to me this week that the Google memo failed to constitute hostile behavior because it cited peer-reviewed articles that suggest women have different brains. The well-known scientist who made this comment to me is both a woman and someone who knows quite well that “peer-reviewed” and “correct” are not interchangeable terms.

—University of Washington particle physicist and philosopher of science Chanda Prescod-Weinsten, criticizing what she calls the “shoddy science” that propped up Damore’s argument (August 9)

That’s never made any sense to me. Why would resistance arise if you stop using your antibiotics? In fact, I think the adage should be that in order to ensure increased likelihood that you will successfully treat your infection, you should complete your full course of antibiotics, but bear in mind that the risk you run is, the longer you use antibiotics, you increase your risk of developing resistance.

—MIT biologist Jim Collins, on the emerging understanding of the effects of finishing courses of antibiotics on the development of resistance in pathogens (The Scientist, August 11)