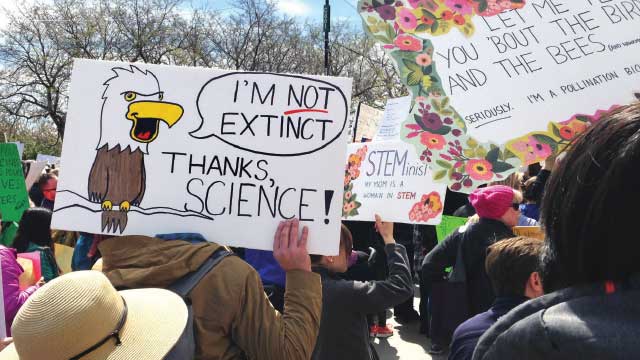 I am the son of a refugee from Nazi-occupied Europe and the grandson of refugees from tsarist Russia. I [am] marching in honor of the immigrants who came to this country and contributed to the advancement of scientific knowledge and to improvements in health that have benefited the people of Boston and the citizens of this planet.

—Harvard Medical School researcher Thomas Michel, about why he planned to participate in the April 22 March for Science in Boston (April 21)

To get this many thousands of scientists in so many towns and cities around the world to say, “We should go public with our science and with our concerns about the future of science,” that is something I’ve never seen—at least in half a century.

—Rush Holt, CEO of the American Association for the Advancement of Science, on the March for Science...

Today, I was Trumped. I have had the pleasure of serving on the EPA Board of Scientific Counselors, and my appointment was terminated today.

—Michigan State University environmental economist Robert Richardson, in a tweet following his dismissal and that of 8 of his colleagues on the 18-member US Environmental Protection Agency’s Board of Scientific Counselors, who received notification that they would not be serving a second three-year term, as has been customary (May 5)

Questions about the validity of forensic science will not go away. Failure to address them will lead to further convictions of innocent people. For our society, the stakes don’t get much higher.

—Glenn Branch, deputy director of the nonprofit National Center for Science Education, on a new crop of bills that aim to change the way several scientific topics are taught in US public schools (May 8)

French science . . . would not survive a withdrawal behind our frontiers and restrictions to the circulation of brains and ideas. On an endless number of topics, [including] migration, health, the environment, and even the history of our country, the ideas disseminated by the National Front are in open contradiction with undeniable evidence established by research and with the necessary autonomy of the scientific community.

—The directors of nine of France’s major public research institutes, in an open letter circulated before the French presidential election in early May. National Front candidate Marine Le Pen lost to centrist Emmanuel Macron in a landslide. (April 27)