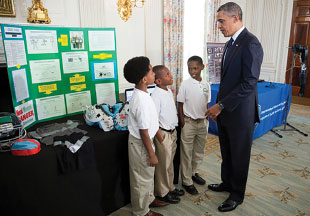 We must keep funding scientific, technological, and medical research. And above all, we must embrace that quintessentially American compulsion to race for new frontiers and push the boundaries of what’s possible. If we do, I’m hopeful that tomorrow’s Americans will be able to look back at what we did—the diseases we conquered, the social problems we solved, the planet we protected for them—and when they see all that, they’ll plainly see that theirs is the best time to be alive.

Presidents have power over the direction of scientific research on a very large scale, which is...

—Susannah Gal, Penn State Harrisburg associate dean for research and outreach, on the impact a newly elected president can have on the direction of the US research enterprise (November 1)

So publishing more papers is like buying more tickets. And that’s why you have a bigger impact during your more productive years.

—Statistical physicist Roberta Sinatra of Central European University in Budapest who coauthored a recently published Science paper that reported an analysis of more than 500,000 studies across multiple fields and suggested that dumb luck plays a big role in citation impact (November 3)

Our present analysis conclusively shows that females do have fewer distinct coauthors over their careers, but that this gap can be accounted for by differences in number of publications. We also find evidence for the hypothesis that female scientists are more open to novel collaborations than their male counterparts, a behavior that was shown to correlate with producing work of greater impact.

I’m just trying to save people’s lives, and now I’m being thrown into this abortion fight as a proxy. I have nothing to do with abortion, I don’t encourage abortion—I just use tissue that would otherwise be discarded. And now I’m painted as this “baby killer” just for doing research as a medical student.

—Eugene Gu, a Vanderbilt University surgical resident who was the first to successfully transplant the (legally obtained) heart and kidney of a human fetus into a rat, on the Congressional investigation of his company, Ganogen (The Huffington Post, November 3)

Ralph Cicerone was a model for all of us of not only doing what counts, but doing it with honesty, integrity, and deep passion.

—Marcia McNutt, president of the National Academy of Sciences, remembering her predecessor, who died last month at the age of 73 (November 7)