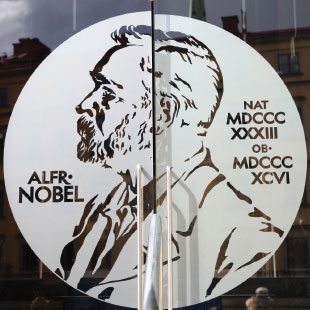 Eventually, it becomes hard to take the selections seriously, because we have no idea what factors are taken into consideration, except that somehow, it ends with only white and Asian men receiving the prize.

—Chanda Prescod-Weinstein, a theoretical astrophysicist at the University of Washington in Seattle, on the lack of diversity
among science Nobel laureates (LiveScience, October 5)

As wonderful as it is to advance physics, chemistry, physiology or medicine, it’s at least as wonderful to tackle environmental problems, predict natural disasters, demystify how species interact, and educate a population to grapple with complex and important scientific topics. The Nobel organization should take a bold leap into the present and shine its bright light more widely—and unshackle itself from
a 19th-century vision of what makes good science.

—Gabriel Popkin, science and environmental writer, in a New York Times op-ed on...

The support (from my cash prize) would last only five years at most. It is important to put in place a permanent system that assists young researchers.

—Cell biologist Yoshinori Ohsumi of the Tokyo Institute of Technology, on his decision to use his $930,000 Nobel Prize winnings to set up a fund for scholarships and research grants for young researchers (The Asahi Shimbun, October 4)

I am very disturbed by the talk coming out of the U.K. at the moment. Anything that stops the free movement of people is a big negative for science.

—Sir Fraser Stoddart, a Scottish chemist who was awarded a Nobel prize last month for his work on molecular nanomachines, on the potential harm the Brexit may have on research (The Guardian, October 6)

A source of common frustration for people at the NIH is to realize that in general the public doesn’t understand that the money that goes into the NIH ends up supporting scientists whose work has widespread public benefit and that the advances that occur can frequently be traced back to discoveries that were made 10, 20, 30, 40 years earlier.

—Cancer researcher Harold Varmus, former director of the National Cancer Institute, in answer to a question about the pace at which science goes from basic research to clinical relevance (Undark, September 20)

We’re not trying to assign blame or criticize anyone or call anyone consciously sexist. Rather the point is to use the results of this study to open up meaningful dialogues on implicit gender bias, be it at a departmental level or an institutional level or even a discipline level.

—Kuheli Dutt, a social scientist and diversity officer at Columbia University, on her Nature Geoscience study of hundreds of postdoc letters of recommendation that found female applicants were only half as likely to get superlative letters as their male counterparts
(Scientific American, October 6)