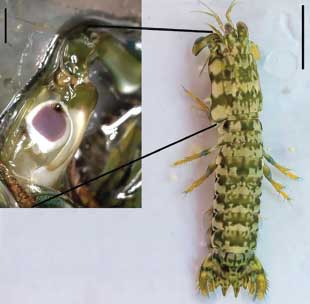 MOOD DETECTOR: A rock mantis shrimp (Neogonodactylus oerstedii) may communicate its fitness and aggression to rivals through the use of UV- reflective spots on the sides of its body. A.M. FRANKLIN, ET AL., ROY SOC OPEN SCI, doi:10.1098/rsos.160329, 2016.

Mantis shrimp, or stomatopods, are well known for aggressive temperaments and complex visual systems, but until now we’ve known very little about whether and how they use color to communicate with other mantis shrimp. Our experiments demonstrate that they use a complex signaling system that combines the UV reflectance of an important spot of color as well chemical cues to help them judge their opponent’s state of aggression, fighting ability, and the presence of a stomatopod in a refuge.

The most amazing thing is that it’s not like seeing light. It’s almost a feeling, at the threshold of imagination.

It’s part of our evolutionary history. Magnetoreception may be the primal sense.

Large, publicly owned publishing companies make huge profits off of scientists by publishing our science and then selling it back to the university libraries at a massive profit (which primarily benefits stockholders). It is not in the best interest of the society, the scientists, the public, or the research.

—University of Cambridge animal behaviorist Corina Logan, on the need for open access in science publishing (From “The 7 biggest problems facing science, according to 270 scientists,” Vox, July 14)

I believe in science. I believe climate change is real and that we can save our planet while creating millions of good-paying clean-energy jobs.

The concept of global warming was created by and for the Chinese in order to make U.S. manufacturing noncompetitive.