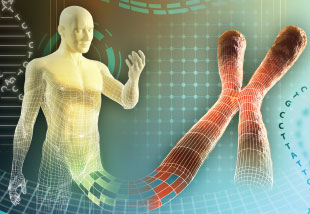 Further understanding of genetic blueprints could come from construction of large, gigabase-sized animal and plant genomes, including the human genome, which would in turn drive development of tools and methods to facilitate large-scale synthesis and editing of genomes. To this end, we propose the Human Genome Project–Write (HGP-write).

—New York University geneticist Jef Boeke and 24 others, in a Science Perspective about the launching of a new genomic-scale engineering project (June 3)

—Francis Collins, director of the National Institutes of Health, speaking about the ethical pitfalls of HGP-write (June 2)

[Viruses], not lions, tigers or bears, sit masterfully above us on the food chain of life, occupying...

—Claus Wilke and Sara Sawyer, virologists at the University of Texas at Austin and the University of Colorado Boulder, respectively, in a recent eLife commentary on how viruses drive evolution and adaptation in human and other mammalian genomes (May 17)

In the tale of Chicken Little, reasonable farm animals could disagree about whether the sky was falling, but no one had any misconceptions about what the petite poulet was chirping about. The discussion of reproducibility needs its own lingua franca.

—Journalists Ivan Oransky and Adam Marcus, writing in STAT about a recent Science Translational Medicine paper that bemoans a lack of consensus on defining “reproducibility” (June 1)

I think it’s ethically dubious to run the Olympics when you’ve got an epidemic of a virus that we don’t understand very well.

—New York University bioethicist Arthur Caplan, warning of the potential dangers to visitors and athletes attending this year’s Olympics in Rio de Janeiro as the Zika virus continues to spread around the Americas (June 3)

If I would be an athlete competing, from what I’ve read, I would be more concerned about the pollution in the water than Zika.

— Alessandro Vespignani, physicist at Northeastern University in Boston, on the fears being expressed about holding the Olympics this summer in Rio de Janeiro (June 3)