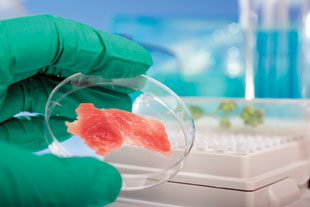 We shall escape the absurdity of growing a whole chicken in order to eat the breast or wing, by growing these parts separately under a suitable medium.

Just one in five Americans would be willing to eat meat that was grown in a lab. Men express a greater willingness to do so than women, and college graduates are around three times as likely as those who have not attended college to say this is something they’d attempt.

—Pew Research Internet Project summary of the “U.S. Views of Technology and the Future” questionnaire (April 17)

As an environmentalist, and someone who believes that everyone in this world has a right to a healthy and nutritious diet of their choosing, I could not have chosen a more counterproductive path. I now regret it completely.

—Environmental advocate Mark Lynas, publicly apologizing for his two-decade-long anti-GMO stance in a speech at the Oxford Farming Conference (January 3, 2013)

If you wish to make an apple pie truly from scratch, you must first invent the universe.

—Astronomer and science communicator Carl Sagan, during a 1980 episode of Cosmos

—Ozge Sigirci, Cornell University Food and Brand Lab researcher, in a statement about her recent study that found diners reported enjoying the taste of food more when the price tag was higher (April 29)

That eating should be foremost about bodily health is a relatively new and, I think, destructive idea—destructive not just of the pleasure of eating, which would be bad enough, but paradoxically of our health as well. . . . We are becoming a nation of orthorexics: people with an unhealthy obsession with healthy eating.

—Author and activist Michael Pollan, from the introduction to his book In Defense of Food: An Eater’s Manifesto (2008)