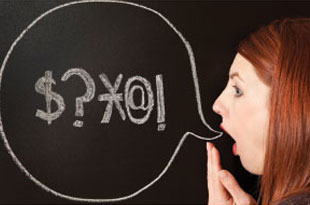 WTF???: According to a new study, people who can spew or write more swear words in the space of a minute were more verbally fluent in general.© ISTOCK.COM/SHARON DOMINICK

This finding can serve as a nice empirical middle-finger from vulgarians everywhere, directed at those who had, until now, been unfairly judging them for their linguistic abilities. Swearing, it seems, can be creative, smart, and even downright lyrical.

—Piercarlo Valdesolo, a psychologist at Claremont McKenna College, writing in a recent issue of Scientific American about a new study that found subjects who were more fluent with swear words tended to have larger vocabularies than those who exhibited less-robust potty-mouthing abilities (April 5)

We are particularly concerned that misperceptions about NIH’s priorities and interests may be causing investigators to submit fewer basic research applications.

—Francis Collins, director of the National Institutes of Health, and 39 other...

If Greenland freshwater shuts down deepwater formation and cools the North Atlantic several degrees, the increased horizontal temperature gradient will drive superstorms, stronger than any in modern times. All hell will break loose in the North Atlantic and neighboring lands.

I admit that it is difficult to bring more subtle and varied political approaches to the table. Groups of researchers that have tried to do so— such as the Federation of American Scientists and Union of Concerned Scientists—have struggled to gain traction. Still, there is a fresher, grass-roots movement, exemplified by local “skeptics” groups, through which younger scientists are trying to make their work relate to society’s wider concerns.

But at the top, there is paralysis: leading scientific organizations do little except chase money and
reinforce the ruling nexus of politics and finance.

—Science writer Colin Macilwain, in a Nature column on the relationship between today’s scientists and politicians (March 16)

The preprint movement . . . may presage the need for a greater cultural shift [that] scientists have not yet ,been willing to make: evaluating one another based on the substance of their papers, not where they are published.

—New York Times correspondent Amy Harmon, on the burgeoning trend of researchers directly publishing their work on the Internet rather than going through traditional publishing channels (March 15)

The medical literature is prone to overstating results, a condition not thoroughly recognized among policymakers. . . . The state of the current medical literature makes it of utmost importance that all sections of the manuscript are read, including associated letters to the editors and information on ClinicalTrials.gov, before authors’ recommendations are accepted.

—Kevin Kavanagh and colleagues, in a recent opinion piece published in the Journal of Patient Safety about the use of spin in clinical research on infectious diseases (March 24)