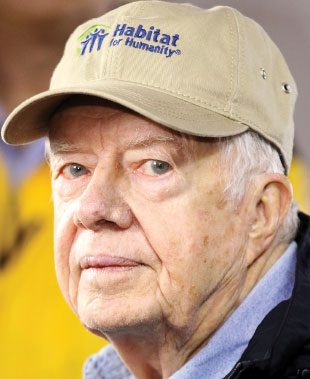 CARTER’S CANCER: The former president’s doctors found melanoma that had spread to his brain in August 2015. They declared him in remission last month.© ISTOCK.COM/EDSTOCK

It’s a treatment called immunotherapy, and it removes the obstacles to my own immune system to fight against cancer, basically—it’s kind of complicated. But it’s worked very well for me, and I had an MRI for 2 hours and 10 minutes, and then the doctors determined that I didn’t need any more treatments.

—Former US President Jimmy Carter, announcing to his Sunday school class at Maranatha Baptist Church in Plains, Georgia, that he would stop receiving treatment after three months of immunotherapy aimed at the melanoma that had spread to his brain (March 7)

Commonly discussed causes of irreproducibility, such as poor experimental design and mislabeled reagents, are actually symptoms. The elephant in the room is hyper-competition, which continuously fuels...

The mistake is to think that any published paper or journal article is the end of the story and a statement of incontrovertible truth. It is a progress report.

In STAP, people got extremely pissed off about the letter P—for pluripotency—while the letter S—for stimulus—was the most interesting.

The progress over the past forty-five years in combating cancer arose largely from challenging authority and rejecting conventional thinking. That means skeptics in both science and policy should be eagerly welcomed, not damned.

A great chorus of formal condemnation shall be lifted up, and my male colleagues will sputter with gall, appalled by the actions of bad apples so rare they have been encountered by every single woman I know.

—Plant biologist Hope Jahren, on the appropriate response to the pervasive practice of sexual harassment in academic science, in an opinion piece in The New York Times Sunday Review (March 4)