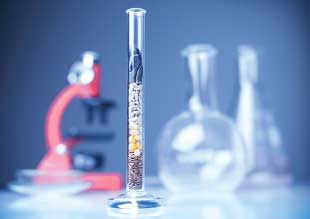 THE SEEDS OF SCIENCE: Agricultural science has taken a back seat to biomedical research in the U.S.© ISTOCK.COM/NIKOLA NASTASIC

Today, farm production has stopped growing in the United States, and agriculture research is no longer a priority; it constitutes only 2 percent of federal research and development spending. . . . We need another ambitious surge in agricultural science.

—Nobel Prize-winning geneticist Phillip A. Sharp and Alan Leshner, CEO of the American Association for the Advancement of Science, in a New York Times opinion piece on the need to invest in agroscience (January 4)

If we look closely enough, nothing we do in the lab will ever be precisely the same as nature. The question should be whether what we have created in the lab allows us to do something beneficial that nature does not. In other words, can we now do something we want to do...

—University of California, Hastings College of the Law professor Robin Feldman and Vern Norviel, a partner at Wilson Sonsini Goodrich & Rosati, writing in the Yale Journal of Law and Technology about changing the definition of what constitutes patentable life-science discoveries (January 8)

Each defecation event, which excretes about  1/3 of the colonic bacterial content, may flip the ratio to favor human cells over bacteria. This anecdote serves to highlight that some variation in the ratio of bacterial to human cells occurs not only across individual humans but also over the course of the day.

—Weizmann Institute of Science researchers Ron Sender, Shai Fuchs, and Ron Milo, writing in a bioaRxiv paper suggesting a revised estimate for the ratio of the number of human to bacterial cells in healthy people  (January 6)

If you take all journals and rank them according to prestige, the most prestigious journals publish the least reliable science (at least when you look at the available evidence from experimental fields).

—Björn Brembs, a neurogenetics researcher at the University of Regensburg in Germany, in an email to Vox about the link between a scientific journal’s clout and its propensity to publish iffy papers (January 11)

—The Study of Maternal and Child Kissing (SMACK) Working Group, authors of a satirical study published in the Journal of Evaluation in Clinical Practice designed to highlight the limitations of evidence-based medicine (December 29)

We call for public debates in which the U.S. presidential and congressional candidates share their views on the issues of science and technology policy, health and medicine, and the environment.

— From an online petition being circulated by the nonprofit ScienceDebate.org, which seeks to encourage candidates to address science research and innovation issues on the campaign trail