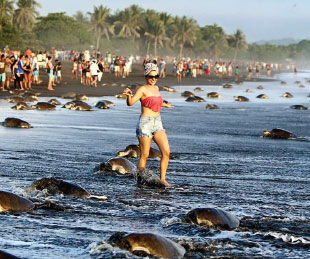 TURTLE TOUCHERS: Tourists in Costa Rica made international headlines this year when they mobbed Ostional Beach on the country’s Pacific coast, scaring off scores of olive ridley sea turtles that had come ashore to lay eggs in the sand.© SINDICATO DE TRABAJADORES DE MINAE

We know that humans are able to drive rapid phenotypic change in other species. If individuals selectively habituate to humans—particularly tourists—and if invasive tourism practices enhance this habituation, we might be selecting for or creating traits or syndromes that have unintended consequences.

—UCLA ecologist Daniel Blumstein and coauthors, on the impacts of ecotourism on wildlife in a recent paper in Trends in Ecology & Evolution (October 9)

Our study results suggest that if you are 40 years old now, you’d have to eat even less and exercise more than if you were a 40-year-old in 1971 to prevent gaining weight. However, it also indicates...

—Jennifer Kuk of York University’s School of Kinesiology and Health Science, on a study that tracked dietary data for more than 36,000 American adults over more than 35 years (September 21)

When thousands of scientists think political considerations are given too much weight, that’s a problem. We need to make sure scientific integrity isn’t just a box to check off and forget about, but that it’s integrated into the culture of federal agencies.

— Gretchen Goldman, lead analyst at the Center for Science and Democracy, in a statement about a survey of 7,000 scientists at federal agencies (October 1)

Fear of potential criticism or backlash dilutes our capacity to lead in public health.

Immigration to my country harms me, it harms my family, it harms my people. Whoever invites or welcomes immigrants to Europe and Germany is my enemy. Immigration unnecessarily defers the collapse of capitalism, its final crisis.

—Former University of Munich bioinformatician Gangolf Jobb, in a statement that he was changing the license on his “Treefinder” phylogenetics software to bar its use by researchers from Germany, Austria, France, the Netherlands, Belgium, the U.K., Sweden, and Denmark—”the countries that together host most of the non-European immigrants” (late September)

I’d say not being able to use Treefinder would be no great loss to anyone. I would stop using [Treefinder] just on general principle, even if we had to resort to using pencil and paper.

—Sandra Baldauf, biologist at Uppsala University in Sweden who had previously used Treefinder in published papers, talking to Science about the multiple alternatives to the program (September 29)