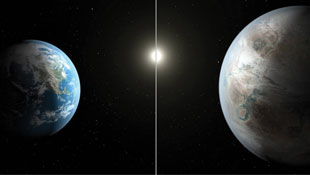 NEW WORLD: Kepler-452b (artist’s conception, right) is the most Earth-like exoplanet yet found.NASA/AMES/JPL-CALTECH/T.PYLE

—NASA scientist Jon Jenkins, talking about Kepler-452b, the newly described extrasolar planet that has the highest probability of any so far discovered for harboring liquid water and perhaps life (July 24)

At this point it is unethical to teach any other way.

—Clarissa Dirks, microbiologist at the Evergreen State College in Olympia, Washington, and cochair of the US National Academies Scientific Teaching Alliance, on the use of active learning in STEM teaching (July 15)

I worry about the breadth of the Indian scientific enterprise. I think there’s not enough investment in training people properly. There’s a divorce between research and education, by putting research in central institutes and leaving universities to fend for themselves.

Scientific research has a gender gap, and not just among humans.

It is my feeling that the lawyers and embassies should fight it out amongst themselves and just let the scientists get on with plying their trade. I don’t care a jot where the specimen is . . . so long as it is in a safe and accessible place for future scientists to research it.

—University of Portsmouth paleobiologist David Martill, responding to questions that arose about the possible illegal exportation of a Brazilian four-legged snake fossil he recently found in a German museum (August 4)

If the only alternatives for scientific publishing are either inhabiting the gated communities of the 1 percent of the world population, which concentrates wealth at the cost of exploiting the other 99 percent, or being with the people in a favela, long live the favela.

If you’re a scientist who refuses to open up your dataset and your detailed methodology, people increasingly start looking at you funny, because that attitude is deeply at odds with the scientific method. If you want to find the truth, you need multiple people all looking critically at the same data, and having an open and transparent debate about how to interpret it.