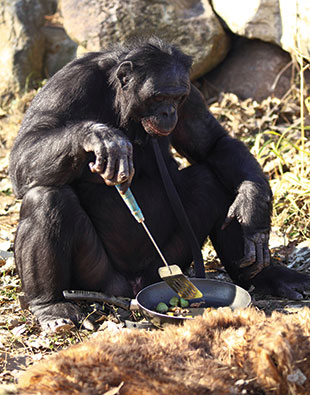 Cooking reshaped our anatomy, physiology, ecology, life history, psychology, and society. Signals in our bodies indicate that this dependence arose not just some tens of thousands of years ago, or even a few hundred thousand, but right back at the beginning of our time on Earth.

—Harvard anthropologist Richard Wrangham, in Catching Fire, his 2009 book about how the control of fire and the cooking of food shaped hominin evolution

Our results indicate that several of the fundamental psychological abilities necessary to engage in cooking may have been shared with the last common ancestor of apes and humans, predating the control of fire.

Although the routine use of misnomers is more often an annoyance than a critical threat to medical research, this phenomenon can stunt progress and further demonstrates a certain lack of rigor in the scientific process.

—Vincent Giguère, associate editor of Molecular Endocrinology, in an editorial warning of the dangers
of giving misleading names to genes and gene products (June 1)

The Ask Alice article, “Help! My adviser won’t stop looking down my shirt,” on this website has been removed by Science because it did not meet our editorial standards, was inconsistent with our extensive institutional efforts to promote the role of women in science, and had not been reviewed by experts knowledgeable about laws regarding sexual harassment in the workplace. We regret that the article had not undergone proper editorial review prior to posting. Women in science, or any other field, should never be expected to tolerate unwanted sexual attention in the workplace.

As long as your adviser does not move on to other advances, I suggest you put up with it, with good humor if you can. Just make sure that he is listening to you and your ideas, taking in the results you are presenting, and taking your science seriously. His attention on your chest may be unwelcome, but you need his attention on your science and his best advice.

—Caltech virologist Alice Huang, in a swiftly retracted Science Careers column responding to a female postdoc who sought advice about how to handle her advisor’s inappropriate sexual behavior (June 1)