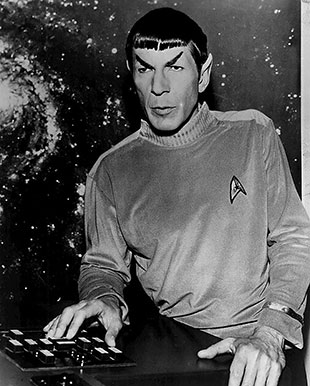 A world without intelligence is a primitive place, Doctor, not an enchanted place. Intelligence is part of the advancing scheme of evolution. Without it, nature reaches a plateau very quickly and does not progress beyond raw survival. The full flavor of possibility goes unsavored. And that... is a true shame.

My efforts to cope with budgetary limits have been guided by Lord Rutherford’s appeal to his British laboratory group during a period of fiscal restraint a century ago: “. . . we’ve run out of money, it is time to start thinking.”

We knew smoking was bad, but...

—Australian National University researcher Emily Banks, lead author on a BMC Medicine paper reporting that 67 percent of smokers died from smoking-related illness and that the habit increased the risk for at least 13 types of cancer (The Washington Post, February 26)

—Idan Frumin et al., researchers at Israel’s Weizmann Institute of Science, in a recently published eLife paper that suggests that people unconsciously smell their fingers after shaking hands with someone of the same sex (March 3)

Why us? Why? Is it something in our water? Is it genetic? Why both of us in such a short time frame? The doctor said it’s not the water, it’s not the environment, it’s just a freak act of nature.

—Missy Shatley, 38-year-old Prairie Farm, Wisconsin, mother, speaking about how she and her 14-year-old daughter Brooke were diagnosed with cervical cancer this past December, just 13 days apart (ABC News, March 5)

Unnecessary quarantines do not save lives; they lose lives.

—Amy Gutmann, chair of the Presidential Commission for the Study of Bioethical Issues, on the quarantining of US health-care workers who had returned home from treating Ebola patients in West Africa last year (February 26)