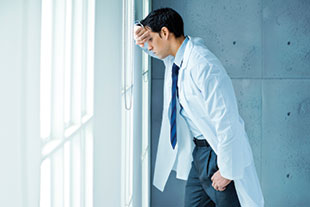 The implications of these data for our young scientists are arresting. Without their own funding, young researchers are prevented from starting their own laboratories, pursuing their own research, and advancing their own careers in academic science. It is not surprising that many of our youngest minds are choosing to leave their positions.

—Johns Hopkins University president Ronald Daniels, writing in a recently published PNAS paper, in which he reports that the number of principal investigators 36 years or younger with a National Institutes of Health grant declined from 18 percent in 1983 to only 3 percent by 2010 (January 9)

I’d be hard-pressed to hazard a guess as to what stage of the academic scientific career is most harmed by the ongoing decline in support for scientific research in the U.S. and other countries. . . . Scientists at every stage of their careers...

—Steve Caplan, biochemist and molecular biologist at the University of Nebraska Medical Center, on the state of researchers’ job prospects and security (January 9)

I don’t think it’s actually right for Discovery Channel. And it’s [a type of programming] that I think in some ways has run its course. I don’t think you’ll be sitting with me here next year asking me a question about something I put on—whether a series or a special—where that’s the dilemma.

—Rich Ross, new president of the Discovery Channel, speaking at a Television Critics Association’s semiannual press tour in Pasadena, CA, about controversial shows, such as 2013’s Megalodon: The Monster Shark Lives, which many critics slammed for being sensationalist and unscientific (January 8)

Ribosomes are not simply the passive translators of genes as described in textbooks. We believe they are the missing link between simple pre-biotic molecules and the single-celled LUCA, the Last Universal Common Ancestor, considered to be the first living thing on Earth.

It was amazing to see: you change a particular amino acid, and you make an animal smart. Or you do the opposite and make it stupid. That is the power of biology.

—Mauro Costa-Mattioli, Baylor College of Medicine neuroscientist, on experiments in which he could modulate long-term memory formation in mice by phosphorylating a translational regulator (The Scientist, February 2015)

What we are sorely missing in the Congress today are those who are science-minded. We are skating on thin ice.

—Mary Woolley, president of science advocacy group Research!America, decrying the fact that only two members of the US legislature currently hold PhDs in hard science (January 5)