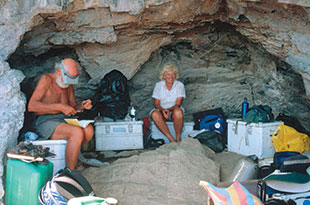 Maybe in 2007, we really grasped what was going on. But it was a very gradual process. No eureka moment.

But then, you could say almost anything we would see on Daphne, we didn’t expect.

The fact that somebody had the risk-taking mentality to actually do this just blows me away. I’m just delighted; . . . to me, it’s absolutely flabbergasting. But I love it. It restores my faith in government.

—Arizona State University’s Charles Arntzen, who conducted early research that led to the development of...

It is very likely true, then, that there can be no scientific way of telling good wine from bad. As with kisses and with art. But this is not because there are not real differences here that we may choose to care about.

—Alva Noë, philosopher and writer, writing on an NPR blog about scientific studies that cast doubt on the abilities of wine and art connoisseurs to discern the finer qualities of their objects of expertise (August 8)

When a female scientist writes a paper, she is more likely to be first author than the average author on that paper. But she is less likely to be last author, writes far fewer papers and is especially unlikely to publish papers on her own.

—Computer scientist and blogger Emma Pierson, commenting on the results of an analysis she did of more than 930,000 papers stored on the arXiv database (August 5)

This is seen in some respects as an honorable way out of a shameful and devastating turn of events: a highflyer brought low by an underling’s mistakes, seeking to atone for and expunge the shame. This touches a chord of sympathy and understanding in Japan.

—Jeffrey Kingston, professor of Asian studies at Tokyo’s Temple University-Japan, about the death of Yoshiki Sasai, stem-cell scientist and deputy director of the RIKEN Center for Developmental Biology, who committed suicide on August 5 (August 8)

Obviously, fraud is a terrible thing. Nothing provides as deep an existential threat to the scientific enterprise than making up data. But as bad as it is, there is something deeply ugly about the way the scientific community responds to misconduct.

—University of California, Berkeley, biologist Michael Eisen, whose father took his own life in 1987 after a member of his NIH lab committed scientific fraud (August 5)